What type of Arduino is this?

I found a bunch of Arduinos (seemingly), but I can't identify the type.

I first thought of a Micro, but the chip is a MEGA328PAU and the Micro should have a MEGA32U4 instead:

I know it's also not a Nano, because the Nano is a bit longer: 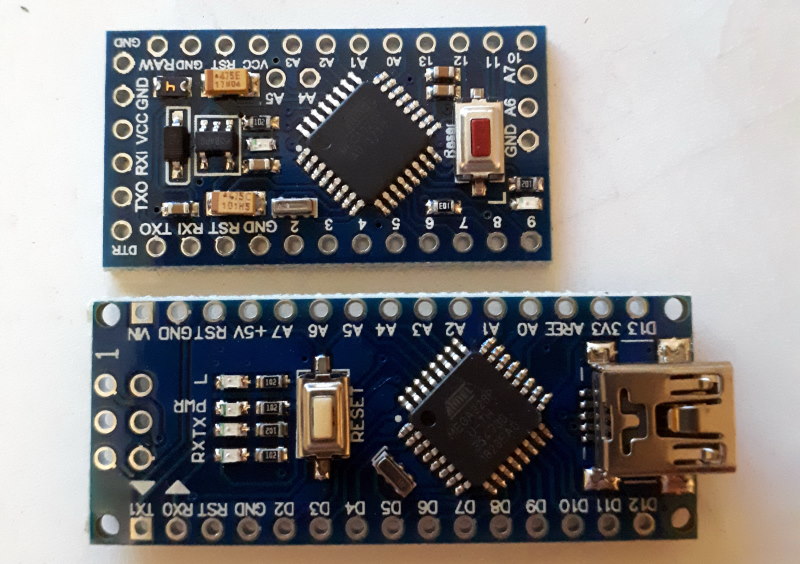 Next, I looked up the List of Board Specs. Based on the chip, the following models remain:

So I am left with Mini, Pro Mini and Pro. The back of the board is not very helpful, since it IMHO misses the markers in the silk sceen:

It definitely looks like the Pro Mini from Arduino Store, but the Arduino store seems not to offer the Mini and Pro, so I don't have a comparison.

What type of Arduino is this? And, if possible, do you have a visual comparison of the three remaining types?

It is a version of Pro Mini. here in DIY MORE shop

To determine the frequency, look at the resonator (the component next to pin 2).

EDIT: the resonator markings are hard to read and very cryptic. to determine the frequency you could install Sparkfun boards package. There you can select the different variants of Pro Mini. Upload Blink. If the upload is successful and it Blinks in 1 second intervals, you have the right setting.

Not the answer you're looking for? Browse other questions tagged board or ask your own question.