need to compare if a byte is less than 80 hex

I am using an infrared sensor called OTI301. In its data sheet it says that in order to obtain object temperature and ambient temperature values I need to extract the binary information from the sensor and use the binary information in given formulas. I have done all that but for some reason I am not getting the right values for the object temperature. The ambient temperature seems to work well but when I put a hot object, more than 320 F, the formula returns a random negative number. Also the the sensor can go up to 780 F so I know the temperature has not been capped. Please see pictures for important data sheet information, or here are the links for the complete data sheets https://drive.google.com/file/d/1XMRDCNzY3fn0q6lkGejs5D-pqksfRuZ8/view?usp=sharing. https://drive.google.com/file/d/1mmdkHkNbwC5VgQxGMrq07XolajNvgBkN/view?usp=sharing. Lastly, here is the part of the code where I extract the information and apply formulas. 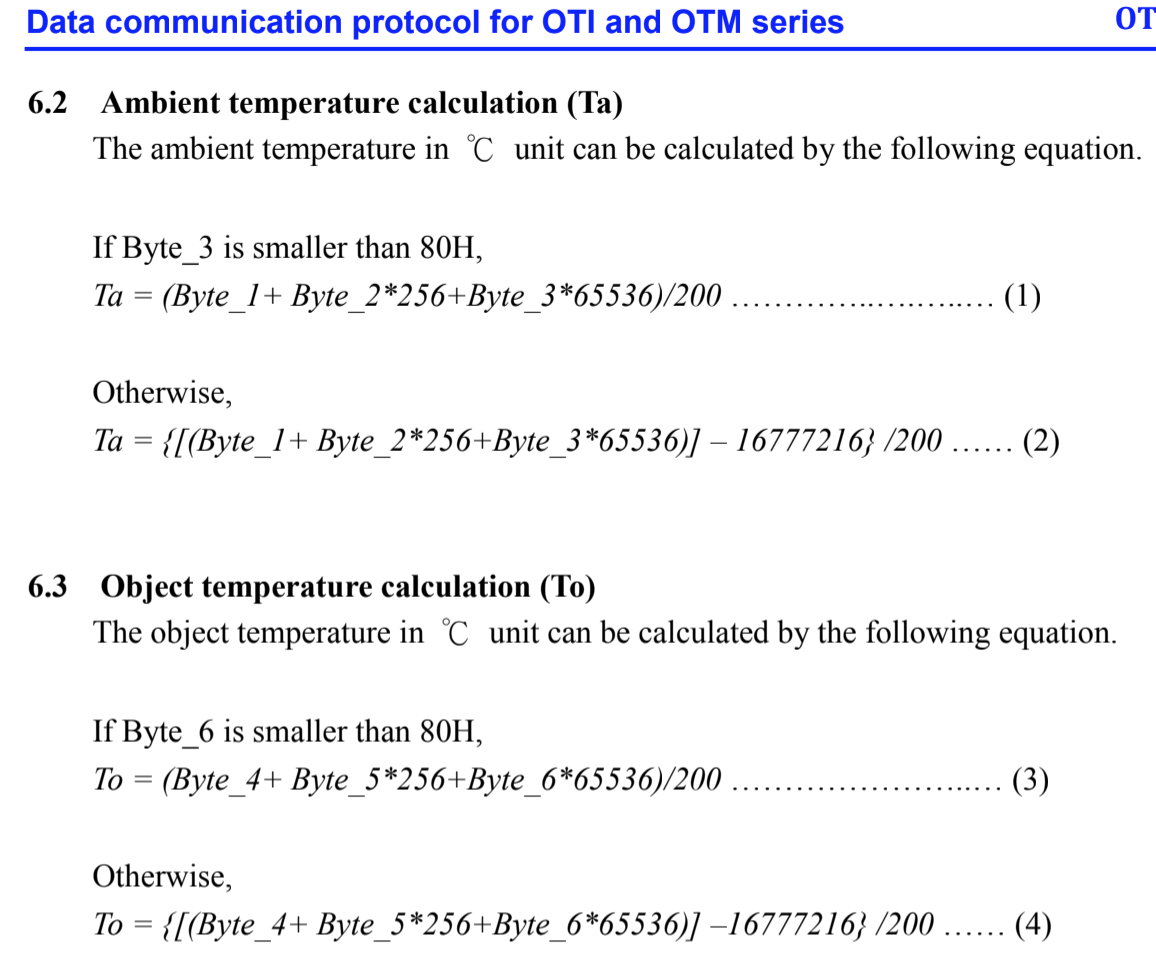 You said "I defined TA as a float." That doesn't matter. In C/C++, expressions are only "promoted" to a larger/different data type AFTER they are evaluated. Your calculations are being done using 16-bit ints, which overflow, and then cast to a float.

That version of the code forces data[5] to an unsigned long before multiplying it by 65536.

Do the same thing to the value that you multiply by 65536 in all of your expressions and you should avoid overflow.

The rules of integer arithmetics are tricky in C++. There are rules that give the type of integer literals:

Then there are rules for the types used in arithmetic operations. No computation is ever done on a type smaller than int: anything smaller is promoted to int. Then, if you combine two operands of different types, the larger type “wins” and the compiler implicitly converts the other operand to the larger type. Note that if two types have the same bit size, the unsigned one is considered “larger”.

Let's go now through your formula, and see the types of the different terms:

The simplest solution is to force 256 to be a long int, by appending the L suffix to the number. Then the multiplication will be performed with the long int type, and there will be no overflow:

On a final note, it is worth noting that the numbers 256, 65536 and 16777216 used in the formula are all powers of two. Even powers of 256. You may notice that, save for the division by 200, what this formula describes is the coding of an integer as a 24-bit, little-endian, two's complement number. This format (two's complement little-endian) is exactly what the Arduino uses internally for representing numbers. You could then avoid all those calculations and get your result by just telling the compiler that what those memory cells are actually holding is a 24-bit integer:

This works for both positive and negative temperatures, but it has the drawback of breaking some C++ rules (aliasing rules), and using the non-standard type __int24. A safest way to achieve the same is to build a 32-bit integer by putting the bits in place using bitwise operations. But note that then a sign-extension byte is needed to convert the 24-bit number to 32 bits:

Not the answer you're looking for? Browse other questions tagged arduino-nano temperature bit bytes or ask your own question.

1
Hex/Byte Reversing and Conversion
1
Bit Number to Byte Value conversion (AVR Docs)
1
How to modify a created byte?
2
How to convert char[12] to byte[6]
0
Extract binary numbers from infrared sensor that uses I2C bus
0
Is there a variable type of half byte? Is there a workaround?
0
Pass Byte Array to Char and Send to a Separate Arduino
1
Changing single bit in byte array