Spikes in CO2 and TVOC measurements with CJMCU-811 sensor

Firstly, I'm not sure if this is the right SE to ask this question. Please feel free to direct me somewhere else if needed.

I am observing large spikes in CO2 and TVOC measurements using the CJMCU-811 sensor. When plotted it looks like this: 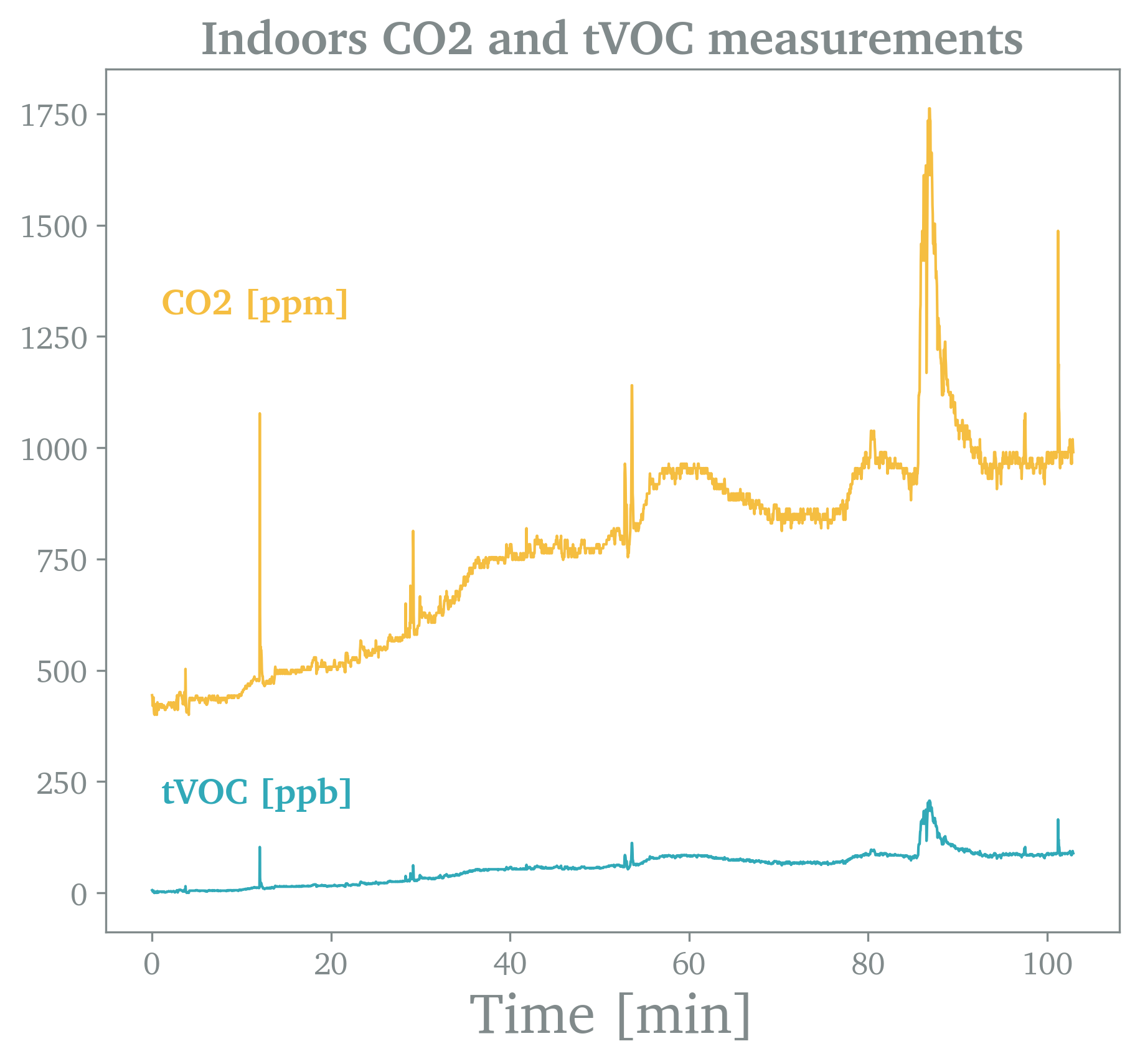 Nothing particular is happening around the sensor at those moments of spikes, I'm not breathing on the sensor etc.

I use Arduino Uno with the following code:

Of course I can filter and not worry about them, but I'm nevertheless curious what is causing it. Any suggestions what could be the reason for that?

I have two of those sensors in a long term setup and I know those spikes very well. I once put lots of effort in debugging and I personally gave up on the ccs811 and use a different sensor now.

Back then I have already tried what Jaromanda suggests in his comment. Both of my sensos showed the same behaviour while the spikes on both sensors did not correlate in any form. Also, if I remember it right, those erronous readings appeared to be at dedicated values. I tried several pullups, which also didn't make any difference and on the oscilloscope everything looked fine. Printing the output of the I2C related functions revealed that communication was always stable. If it was I2C related I would expect those erronous readings to be completely random anyway (which they aren't from my experience).

My final (vague) theory was that maybe there exist race conditions between the computation and the I2C interface or maybe the adc and the approximation algorithm (that's all "inside" of the sensor). I once produced such a bug myself which resulted in a similar behaviour.

At least I'm pretty sure that there is nothing you can do in your sketch to fix this problem, because for the mentioned reasons it is very unlikely related to communication problems. You might want to work-around it or look for an updated firmware. Or (my prefered solution) choose a sensor which does a true CO2 measurement (the ccs811 only returns a pseudo, calculated CO2-equivalent approximation). Those higher-class sensors use NDIR technique and are only a bit more expensive (still under 50$) but you'll probably have much more reliable readings, less problems and a wider measurement range (up to 0-40000ppm vs 400-8192ppm).

Ps: did you follow the guidelines concerning the "burn-in time"? Because honestly, that was a mistake I did: I simply plugged it in of curiosity to test communication and read about this step afterwards. But I don't believe it has something to do with this problem, because there are physical reasons why one should do so, but those artifacts seem to be of digital nature.

There is a CCS811 library which supports querying the internal firmware version of the sensor, and flashing a new firmware (latest is 2.0.1). Older firmware versions used to have burn-in compensation which apparently caused more harm than good (instead, new firmware requires sensors to be burned-in during 48 hours), and also relied on an external sensor for temperature compensation, which is simply missing on most cheap breakout boards. Ironically many cheap boards come with CCS811 flashed with an older firmware, which periodically samples the voltage on a floating pin and uses that value to correct CO2/TVOC calculations.

Unless your board features a thermistor, consider upgrading the sensor firmware to 2.0.1. Even or boards with a thermistor (e.g. original Adafruit), new firmware might give better results.

I saw similar behavior from 3 CJMCU-811 sensors that I bought (in one order, so probably the same manufacturing lot) in mid 2019. Two gave readings with steady, spikey, but uncorrelated upward growth. The third periodically spiked into the 2000-3000 ppm zone and then popped back to ~450 ppm (in an empty room with decent airflow). A logic analyzer on the I2C lines didn't show issues (or I missed them).

I went as far as adding a line to reset the sensors every few minutes. Replacing the sensors with what I assume was a different manufacturing lot resolved the issue.

Months later: The replacements have gone haywire, occasionally giving readings in the 3000ppm range until reset, at which point they're back to the 400-600ppm range for a while until drifting higher. I recommend avoiding the ccs811.

5
CO2 sensor for arduino
2
SainSmart CO2 sensor module use?
3
Seeking help - Using CJMCU 8*8 LED matrix with arduino
0
How to measure CO2, Ammonia and Detect Smoke using MQ135?
0
Make system with ultrasonic sensor and servo
2
How do I add Gyroscope, Accelerometer, Euler, and Temperature data to one Arduino board?