I2C communication between arduino and raspberry pi breaks under stress for unclear reasons. Why?

I am having a behavior I cannot explain while using arduino mega as a I2C slave for a raspberry pi master.

I am showing here an idealised program that shows the issue. I experience pretty much the same behavior in the real application (a keyboard firmware). What I am doing is the following:

This is the code for the raspi

and this is the code of the arduino

As you can see, the point is that I am banging the I2C really, really fast, and the loop is very tight and fast. This is the point of the exercise and the problem to solve arises from this.

Now, once in a while I get an occasional IO error with the raspi python code. This code occasionally fails once, and then everything resumes to normal, but once in a while, it completely breaks down and never recover.

I attached a logic analyser to it, and this is what I found. D3 is the interrupt pin. The others the I2C bus. In a normal transaction, I can see everything working properly (disregard the different content of the response, it was an earlier run)

and a zoom in to the master request and the reply:

When I have a permanent failure, however, the picture is very different

This makes little sense to me. Why would it perform a data write, and who is writing 0x85FF... in my buffer?

Use a logic level conversion IC. 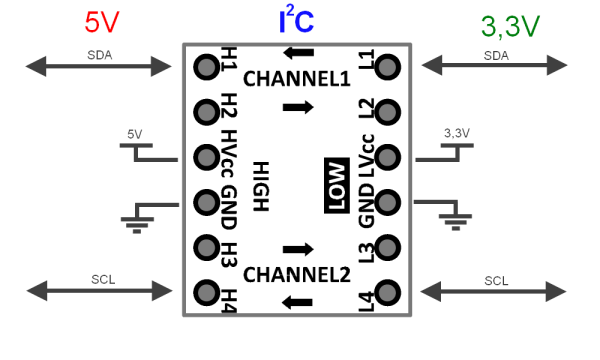 Not the answer you're looking for? Browse other questions tagged i2c raspberrypi atmega2560 or ask your own question.