Where do class files go in Sloeber Eclipse project?

Now... assume I want to create a half dozen new classes:

... but it's obviously not Java, and I'm nowhere close to knowing enough about C++ to properly implement static singletons yet, so for now, I'm just going to create an instance of StateContainer to create and hold those single instances.

So... getting back to the big picture. If my project is in c:\users\moi\Documents\Slober-workspace\FirstSloeberArduinoApp...

In case you're totally confused at this point, my actual .ino file will look something like this:

... and in reality, there will be dozens of subclasses of ExecutionState, each representing a unique execution state.

With Sloeber Eclipse plugin the ino files go to root of the project and the cpp, c and h files can be in root or in subfolders. example: 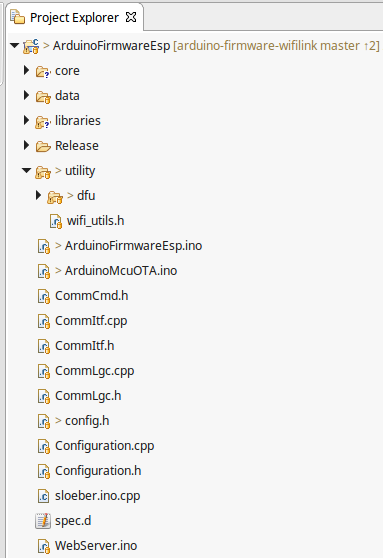 Project folders: data folder in example picture is a convention for a folder with esp8266 SPIFFS files. utility is a subfolder with additional source files of the project.

I put my class files, [class].cpp and [class].h, in the same folder as my project.ino file, at least during development. Then, if they're sufficiently general, I'll move them to [workspace]/libraries/[class]/ for future use.

But even if they're only for this project (so they might as well stay in the project's source code folder), it's good organization to keep them in their own files, since by nature, classes only expose their interfaces, not their "guts".

Not the answer you're looking for? Browse other questions tagged c++ sloeber or ask your own question.

0
Newbie has difficulty compiling unedited svn Arduino code that should work
6
What are the benfits of global variables over static class members?
0
How to define function/macro so it is accesible throughout various cpp files
21
Classes and objects: how many and which file types do I actually need to use them?
1
Arduino declaring class in h and cpp file Undefined Reference
2
Error: “invalid use of incomplete type” and “forward declaration”
4
How to convert Arduino example sketch to a complete c++ project?
2
Undefined reference in Eclipse of .h and .cpp files
0
Class help - Same Object types seem to mix values with each other
0
Compile-time 'Undefined reference' error for functions defined in a .cpp source file that are called in my main project file