With peak consumption at 2A, the SIM800L needs much more current than can be supplied by an Arduino or NodeMCU.

What is the best strategy to power this module, considering that you have access to a 100-240V outlet?

I had to design a board for a customer with a built in LTE modem module (similar to a SIM800), and the power circuitry was something that required special consideration.

One requirement of the board was that the modem should be able to be powered on and off to save power, but that powering it on shouldn't ever cause the rest of the board to brownout.

To this end a separate 5V power circuit was built with a "soft start" facility built in. This was always on, and fed into a number of capacitors to act as a reservoir. From them the power went via a large P-channel MOSFET to switch the power on to the LTE module when needed. The capacitors provided the extra inrush current the LTE module demanded at powerup, and the soft start of the power supply limited the initial inrush current of charging the capacitors.

The power supply also had a "power good" output on it which was monitored to know when the output voltage had risen to an acceptable level (and hence the capacitors were charged) and the LTE module was able to be safely enabled.

The basic circuit was: 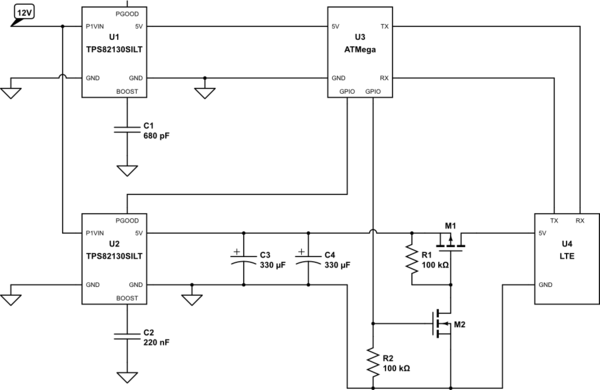 That is a somewhat overkill probably for your situation though, but you should understand how it's done in the "real world" in a proper device. However for experimental / prototyping with an Arduino where you aren't wanting to turn the modem on and off, and aren't too worried about the odd brownout, and bulkiness isn't of as much of a concern, then simply using two suitably sized external power supplies is adequate. One small one to power the MCU (Arduino), and one larger one to power the modem. 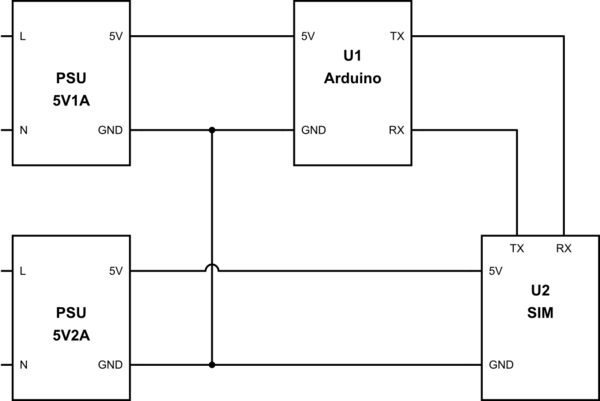 Because the power supplies themselves should have plenty of capacitance, and they are separately powered from a low impedance source (the mains power) there should be no interference between the modem and the MCU.

I am usually using 12V/1000 mA adapter source to power Arduino and adjustable step-down/buck converter which powers GPS and similar modules. Advantage of this is that these converters usually have big capacitors on input and output, so you do not have to use additional auxiliary capacitors.

The cleanest solution is to use separate power supplies for your MCU and your other high power devices. Get a 2.5A supply for the SIM800L, and a more modest supply for the Arduino/NodeMCU.

If you use the same power supply for both, you should use a bigger power supply than your max current needs to minimize "droop" as the load changes. You might also need to add filtering capacitors to the 5V rails of each device fed by the power supply.

I've used this 2A power supply in my projects before: https://www.amazon.com/gp/product/B01G6ZJ6DY/ref=ppx_yo_dt_b_asin_title_o00_s00?ie=UTF8&psc=1

You could use one of those for your SIM800L, and a 0.5A supply for the Arduino (A USB power supply would be fine.) Just be sure to tie the ground lines of the separate power supplies together.