Arduino motor shield will only work in one direction

I have this Arduino motor shield which is hooked up with two DC motors. The board is the same as this one from Sparkfun.

It's the same for both channels.

Edit: The setup is powered from a 9V power adaptor through the barrel jack on Arduino. 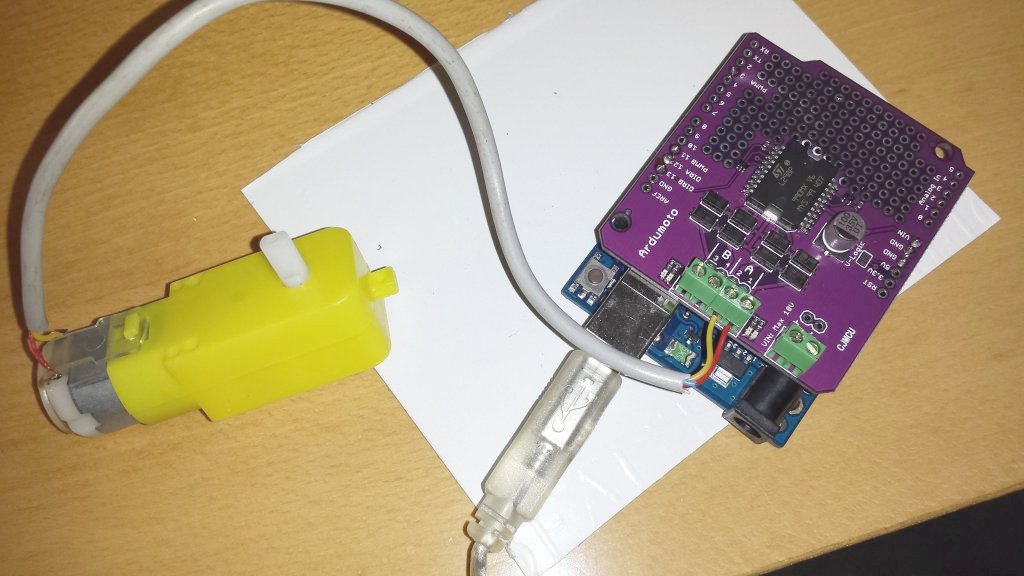 Is the board defective, or am I misunderstanding something?

SOLUTION: Thanks to the edited post (especially #3) in the accepted answer, I not only looked at the schematic (again), I actually understood it. I had already noticed the jumper called V-LOGIC which on the picture from Sparkfun was set to 5V where it on my shield was not set. I really didn't know what it was used for, but I set it to 5V so it was the same. But by looking at the schematic and the inverters, I realized that the inverter was fed from V-LOGIC which was connected to 5V. And bingo: I had not connected the 5V pin on the shield, only vIN which I assumed would be sufficient. The thing is, I am awaiting a set of stackable headers instead of the ones supplied, so I only connected the minimum numbers of pins because I will need to desolder them when I get the new headers.

I think you may be having an issue with how you are powering the shield. Are you trying to do it with just your USB connection?

In your photo, I do not see a connection to your Arduino's barrel jack or to the Vin connector of the shield itself. According to the SparkFun site:

The Ardumoto Shield should be powered through one of two power supply inputs. Pick one or the other:

If you don’t want to use the Arduino’s barrel jack input, you can use the Vin input on the shield instead. This voltage input will supply both the shield and the Arduino. Like the motor outputs, this connection is broken out to both a 3.5mm screw terminal and a 0.1"-pitch header.

Do not supply power to both the Arduino barrel jack input and Vin on the shield!

I hope this helps!

EDIT BASED ON COMMENTS
Since you are properly powering the shield, I would recommend the following (see the shield's schematic for specifics):

Not the answer you're looking for? Browse other questions tagged arduino-uno motor arduino-motor-shield or ask your own question.

3
Debugging a RadioShack Arduino motor/sensor shield
0
How to connect this motor driver board to Arduino to drive bidirectional motor?
2
Arduino Uno + Jaguar Speed Controller + CIM Motor (12V DC)
2
Arduino original motor shield can not supply enough torque to the motor?
1
`servo.attach()` paralyzing (one) motor on L298N
0
Which component is described as a "jumper" (NOT jumper wire) when working with a motor shield?
2
DC motors only run in one direction
0
Arduino powered from motor shield and USB issue