A proper way to get the roll, pitch and yaw values

TL, DR : What is the method(in terms of sensors and algorithm) to get the roll, pitch angles of an aircraft at any instant.

I am planning to build a hobby aircraft. I am so confused about which kind of sensors should I use and how to use them in order to get the roll, pitch and yaw angles of the aircraft.

I think I also have some problems about understanding the concept. I consider these P, R, Y angles similar to the x,y,z coordinates as if they are able to describe the attitude of a body. If something in the below list contains "nonsense" arguments, please also enlighten me about them.

What I want is to be able to know at any instant:

In some sources there is something going on as the importance of order of the application of roll,pitch and yaw. But I cannot understand why this is related.

I have used accelerometer values by inputting them into some formulas on the internet(those arctangent formulas, which everybody uses but nobody explains well) to get the roll and pitch values. However could not understand how to manipulate them in order to meet my requirements(different axis orientations of the sensor).

I also have basic understanding about what a gyroscope is.

P.s : my goal is to build a quadcopter but I guess in order to understand these concepts a fixed wing standard plane model.

In some sources there is something going on as the importance of order of the application of roll,pitch and yaw. But I cannot understand why this is related.

Now, move back to the initial position, and apply the same two rotations in a different order, first around the y axis and then the x axis: Rotate +90° around the y axis (index finger). Your thumb is now pointing to the right, your index finger away from you, and your middle finger upwards. Next, rotate +90° around the x axis (thumb). Your thumb now points to the right, your index finger upwards, and your middle finger towards you.

This is different from the last result: order of rotation matters.

I have used accelerometer values by inputting them into some formulas on the internet(those arctangent formulas, which everybody uses but nobody explains well)

As you can see from the following image, the angle of rotation θ = atan2(x, z). 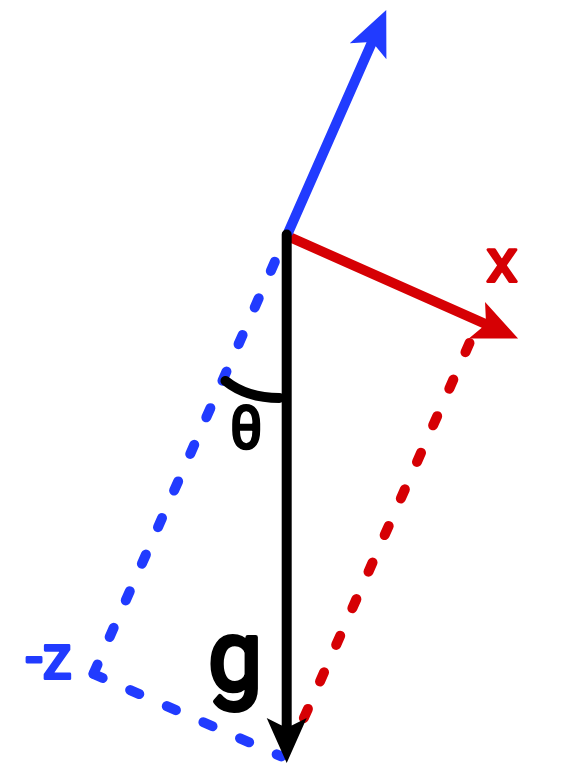 The black arrow is the acceleration due to gravity, and the red and blue arrows are the x and z axes of the coordinate system of the (tilted) sensor.

However, accelerometer measurements are not useful for determining the orientation when the sensor is accelerating, because then the measured vector no longer points exactly downward (in the global coordinate system).

Gyroscopes measure angular velocity. By integrating the angular velocity, you get the angle.
There's one caveat: it is impossible to integrate exactly, because we only have measurements at discrete points in time. This means we have to use something like Euler's method, which is known to result in drift of the orientation estimate. To make matters worse, the measurement is noisy, and this noise is integrated as well, resulting in an even larger error.

Luckily, you can combine both imperfect measurements into a single, better orientation estimate using a sensor fusion algorithm. I've successfully used Sebastian Madgwick's algorithm for my quadcopter.
It uses the measurements of the accelerometer to minimize gyro drift.

Note that this algorithm uses quaternions instead of Euler angles (roll, pitch, yaw), because the latter suffer from gimbal lock, and because quaternions geneally require less processing power.

Also note that you cannot determine the yaw angle using the accelerometer, so you'll get some drift on that measurement.

It's a good idea to do all of your calculations using quaternions. You probably won't need Euler angles for your quadcopter, except maybe for debugging purposes.

If you want to, you can also get the quaternion from the acceleration vector directly:

Not the answer you're looking for? Browse other questions tagged accelerometer android gyroscope imu or ask your own question.

1
Problem with interpretting and using the IMU data
2
How can I implement sensor fusion using a gyroscope and a magnetometer to find the orientation?
5
What is the difference between Accelerometer, Gyro, and Magnetometer Sensor?
1
Help with MPU-6050
1
How to get location of the hand indoors
2
What is corrrect the way to find roll, pitch, yaw?
2
Arduino Mega and gyroscope erroneous values
1
Adafruit_LSM303 tilt compensated compass