how to use hx-53 (IR Transmitter Infrared Sensor Module) with ESP32?

But as i can understand HX-53 data input should be 5v based.

How can i solve this problem?

The HX-53 look like a IR LED and a current limiting resistor on a small PCB.

It also has a LED and a resistor in series for indication when the invisible IR diode is on or off.

So you can change the resistor to a lower value to match the 3,3 volt output from the ESP32.

So replace the 220 ohm with something near 75 ohm. 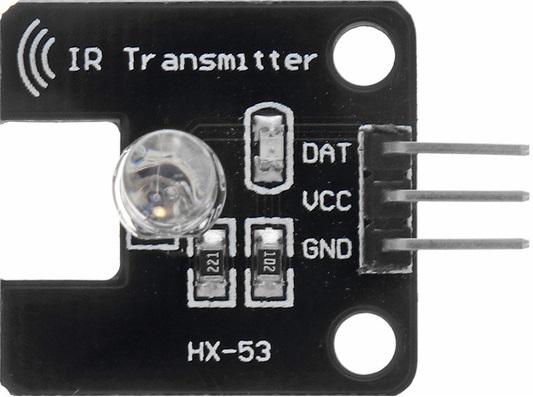 I happen to have one just like yours. I was trying to use it on my Arduino to send commands to my AC like a remote but as it turns out, the Vcc pin on the HX-53 breakout board appears to be a dummy and doesn’t connect to anything as far as i know. By right there should be a transistor circuit driving that LED. As it is now, not only is there insufficient current from the signal pin to drive that IR LED for signal bursts, but the red SMD LED in series with the resistor is also stealing some of the current away from the IR LED. In the end, I had to buy a BJT, a standalone IR LED, some resistors and design my own transistor circuit to drive it.

On the transistor’s collector side I had a connection to Vcc and the IR LED in series with a resistor. On the base side was a connection to the signal pin and a resistor. The emitter was connected directly to Ground. Values of the resistors you use will depend largely on the Vcc, the LED max forward current, the specs of the transistor you choose and available current from the power supply.

Not the answer you're looking for? Browse other questions tagged esp32 ir or ask your own question.

0
How this smal infrared work
0
How to increase the brightness of a IR transmitter LED?
3
How to connect IR Transmitter and Receiver Module?
0
Is it support to use Infrared radiation module in ESP12E?
1
How Arduino IDE work with ESP32?
1
Is possible to use heap_trace_init_standalone() on arduino framework with esp32?