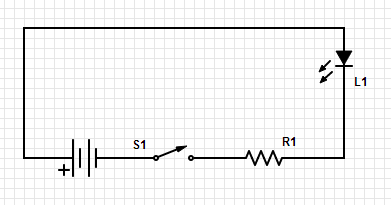 I'm new to Arduino and consequently, to circuits. I've been reading Arduino Robotics by Warren and this was a circuit present in the book.

From what Warren has said, electricity in the circuit travels from the negative pole to the positive, BUT to imagine it as going the other way for simplicity. So, looking at this circuit... it seems useless to have the resistor placed after the LED, based on the + --> - model. Wouldn't the LED turn on before going through the resistor, rendering the resistor useless?

Sorry if this seems like a basic concept, I'm entirely new to this.

Should the Resistor be Placed Before or After the LED?

The important thing to remember is that the direct current electricity must flow through the circuit to be useful. Since the resistor is part of the circuit (meaning that there isn't another path for the current to take) it resists the overall flow, thereby helping to protect the LED. Whether before or after the LED, it would still be in the circuit, and would therefore still reduce current flow.

Visualizing the Flow of Water

2
How safe is it to use my body as part of a circuit?
1
Pulldown resistors and multiple switches
0
Simple Ground circuit layout
1
How to embed a 5V-range Arduino-based controller in a 12V-range DC circuit?
3
How to measure electrical conductivity using Arduino?
1
arduino circuit review/ safety review
1
how do i know what battery(how much ampere and voltage) my circuit needs to work perfectly?
1
Is this circuit risky for an Arduino Uno?