I'm quite a newbie to Arduino and hardware & circuit board stuff, so please forgive me if you feel my questions are too stupid. Recently, I'm working on an assignment which I have to reconstruct a mini claw machine by replacing the original controlling board with Arduino Mega2560.

In the process of doing this assignment, I encountered two major problems.

If you need me to provide more information or pictures, please feel free to ask. 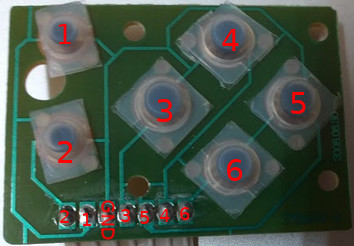 Connect the "GND" pin with ground and the other pins with digital input pins of the Arduino. Be sure to use the internal pullup resistor via pinMode(pin, INPUT_PULLUP). You can then check the button state for each pin with digitalRead(). 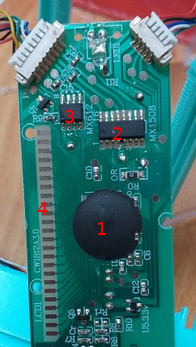 1 is an extra microcontroller, that handles the LCD directly over the lines marked with 4. 2 and 3 are brushed DC motor drivers, to be exactly: 2 (part number MX1805) is a dual H-brigde driver and 3 (part number MX612) is a single H-bridge driver. So enough drivers to drive the 3 DC motors in both directions. The 5 lines, that come from the main board of the claw, seem to run under the driver board and then to the microcontroller. Two of them must be the power supply (5V and ground). It seems that the green wire is ground. Red seems to be 5V. That leaves us with 3 wires, that come directly from the main microcontroller. Without analysing the signals, that run through these lines during operation, it is not possible for me to say, how they are used.

So I think you have 2 possible ways to go:

The second type means doing more yourself, but you will not have to reverse engineer the old electronics, so I think, that would be easier. Each task is simple for itself and you can solve them one by one. The first option on the contrary will leave you with the one relatively difficult task of reverse engineering the communication protocol.

I have thought of 2 basic possibilities for the 3 lines from the main controller to the secondary controller.

That's about what I can think of to reverse engineer this without oscilloscope or logic analyzer. Since neither of this seems very easy for a beginner, maybe you should ask your professor for help. He might be able to give you hints or at least an oscilloscope to work with (most universities should have these). If you get a good oscilloscope image from the lines during transmission, you can ask a question to identify the used protocol.

You said: "This assignment given by my professor is to simply replace the original controlling board with Arduino..."

Isn't the controlling board all one unit, with the LCD controller, motor H-bridges, and general microcontroller?

If you replace the controlling board I think you'll have to replace the motor drivers, and probably the LCD controller as well. I don't see how you can replace the logic function with an Arduino without replacing the entire controller board.

I would do what chrisl suggests, and get an SPI or I2C LCD display, 3 dual H-bridge motor controllers, and an Arduino. You could use the existing motors and the keypad, but reusing the LCD display would mean reverse-engineering it, which is no small feat.

Not the answer you're looking for? Browse other questions tagged atmega2560 or ask your own question.