Can I use an AC signal to make an LED light up with arduino?

I want to use a 220VAC load as a signal and act as a switch to my arduino so Labview could interpret it as an LED ON state. I used a 4n33 octocoupler but it seems that the LED Simulation on labview keeps fluctuating. I think it's because of the negative half of the signal being blocked. Is there a way to fix this?

Here is my schematic 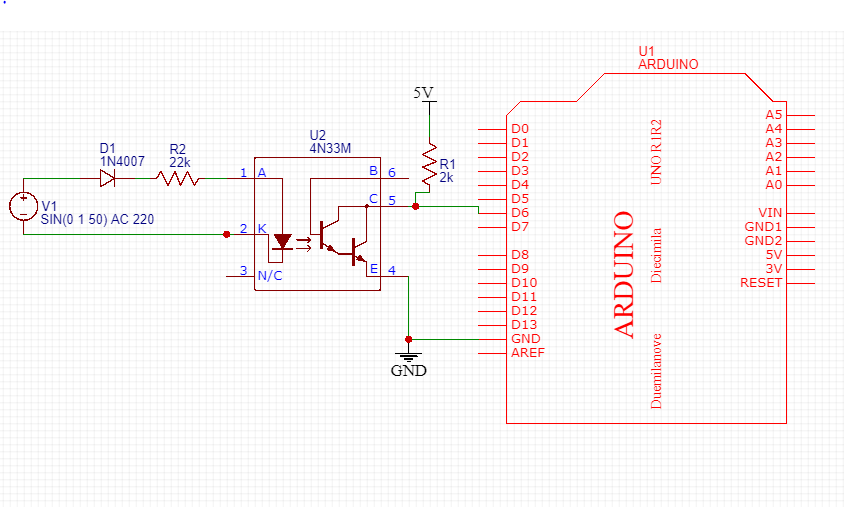 There's certainly an issue with your optocoupler circuit aside from the fluctuation you observe.

During a negative half-wave of 220V, you expect D1 to block the current through the LED. However, 1N4007 as any power rectifier has significant leakage current, about 5μA at normal temperature and up to 50μA when the diode is hot. This current will go though the LED which may have a much lower admissible reverse current (typical 0.1μA), damaging it. One possible schematic would be:

Note that D1 is here not to block reverse current, but rather conduct it safely, protecting the LED of the optocoupler. Also, consider reducing the value of R2 while realising the bulk of current limitation with a non-polar capacitor: this setup will limit the current just the same but will dissipate 0.5W of heat instead of 2W as your resistor would.

Now, in either case the LED is only active when it's forwad-biased, which is less than half of the time, so it's quite normal that you see this fluctuation. In most cases, it can be reasonably dealt with by software: read your pin 3 times with a 5ms delay after each reading, and make a logical AND of your three readings.

If, for some reason you cannot do that in software, you could implement an envelope detector in hardware. I strongly suggest to do it on the low-voltage side instead of 220V side (as e.g. here)

Not the answer you're looking for? Browse other questions tagged switch or ask your own question.

0
How to connect an LED to Arduino LilyPad Mp3
1
LED and Switch Compolation Error Arduino 101
1
How can I make this button toggle the position of a servo?
3
Controlling 10+x 5m led strips with 10+ individual analog floor switches
0
yellow LED not turning off in traffic light simulation
1
Can i use a range in a switchcase like in pascal?
0
LED on same Pin as Toggle Switch, not illuminating
0
Switching 4.2V circuit with 3.3V Arduino GPIO