I'm trying to create a dimmable/ switchable 12v LED strip using an Arduino board and a MOSFET. Many tutorials can be found doing so such as this youtube link.

I've bought a LM317T before I had any substantial knowledge regarding MOSFETs. Trying to understand using some tutorials ( each one used different MOSFET ) made it partialy clear what parameters to look for in such project mainly using this link, but some left in the dark - and this is the reason for this post ( and to understand why my MOSFET is not suitable ).

I'll compare with one suggested, FDC855N

2) Vgs(th) stands for minimal voltage needed for current flow at to drain. it is correct ?

3) why Rds(on) is important for ? only for power dissipation purposes ?

I'll be glad to have answers for those question in comparison to the 317T MOSFET, since 317T datasheet has a different terminology :(

First of all, the LM317 and the are FDC855N different types of devices. The LM317 is a voltage regulator whereas the FDC855N is a discrete MOSFET.

A MOSFET will act as a fast switch allowing you to control the LED's brightness using Pulse Width Modulation.

For what you're trying to do, you can think of the MOSFET as a voltage-controlled switch. If the voltage between the gate and source (Vgs) is greater than the threshold (Vgs(th)), then the current will flow from the drain to the source (Ids).

1) Yes, anything over the typical Vgs(th) of 2.0V, will turn on the switch and cause current to flow; you need to provide a voltage across the drain and source (Vds).

1a) 20V is the maximum rating of Vgs, if you applying anything greater, you'll damage the device.

1b) In reality, the MOSFET is more complicated than just an on/off switch. The gate to source voltage (Vgs) determines how hard the switch is turned on, so increasing Vgs will turn the switch on harder and reduce the resistance (RDS(on)) between the gate and source.

2) Yes, this is essentially correct. The relationship follows a curve and Vds(th) represents an inflection point. This plot from page 3 in the datasheet shows the curve for different temperatures. You can see that the 25C line is basically zero until Vgs reaches about 2.75 volts and then it increases rapidly. 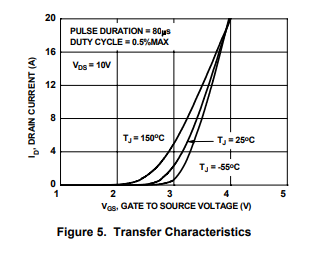 3) RDS(on) is the resistance between the drain and source when the MOSFET is on. You can treat the drain to source path like a resistor and use RDS(on) to determine the power dissipation. For example if your RDS(on) were 0.1 ohm and the current through the drain is 1.5A, then you would be dissipating I^2*R = (1.5)^2*(0.1) = 0.225 , which is below the maximum allowable steady-state power dissipation of the device (Pd) of 0.8 W.

Not the answer you're looking for? Browse other questions tagged mosfet or ask your own question.