I have written the following code for RGB LED:-

Now according to my understanding if I run the above code then only pin named GREEN i.e. 10th pin will give me current not 9, 11th pin. But when I upload the code and run it I see that 9 and 11 pin are giving me current not 10th pin as it is supposed to. Is there a problem in my code? I have checked my circuits are correct. To check current I took jumper wire that was connected to one of my colour and tried inserting it's other end at pins(9, 10 or 11) of Arduino board. If there is current bulb will glow. For above code the bulb was glowing when I inserted the wire at 9 and 11th pin.

A common anode RGB LED can be sketched in a schematic like this: 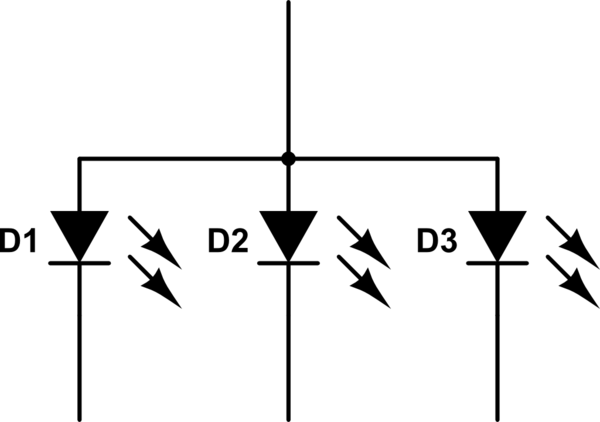 The positive voltage has to be applied to the top, for all the LEDs together. To light the LEDs up, you have to sink the current on the other end, meaning providing ground level at the bottom of that schematic at the corresponding pins. The current will then flow from your 5V pin, through the LEDs into the Arduinos pin.

So your circuit and code work perfectly, you just didn't expect the inverted logic.

Note: The pins of the Arduino can only source/draw a certain amount of current (20mA continuously, 40mA at maximum) without getting damaged. A single, not too strong RGB LED should be OK, but as soon, as you want to drive more LEDs, you should consider using a driver circuit (for example simple transistors). That way the output pins don't have to provide the LEDs current, but only the current to control the transistor.

Not the answer you're looking for? Browse other questions tagged arduino-uno code-review rgb-led or ask your own question.