Arduino DUE and optocoupler 4N25

I'm using an Arduino Due board with an optocoupler 4N25 to simulate a button pressed. I have to open and close a circuit that drive an actuator. In that circuit, when connected, with the tester I'm measuring 6V.

I connect the anode to the pin 12 and the cathode in series with a 150-ohm resistor to ground, and Collector and Emitter from optocopupler to the circuit (and a normal Blink example with the pin 12).

When optocoupler is fired on and off respectively with a tester I measure 0V and 1.7V in the arduino part, and 4V and 6V.

This is not enough and the actuator is always run. I'd like to read 0-6V instad of 4V-6V. Does this depends on how much current goes to the anode/cathode of the optocoupler? Do I have to change the resistor in the arduino part? Any kind of advice? What can I do?

I don't want to use relay because I have read that in respect to a relay they are faster, smaller, longer-lived and quieter. 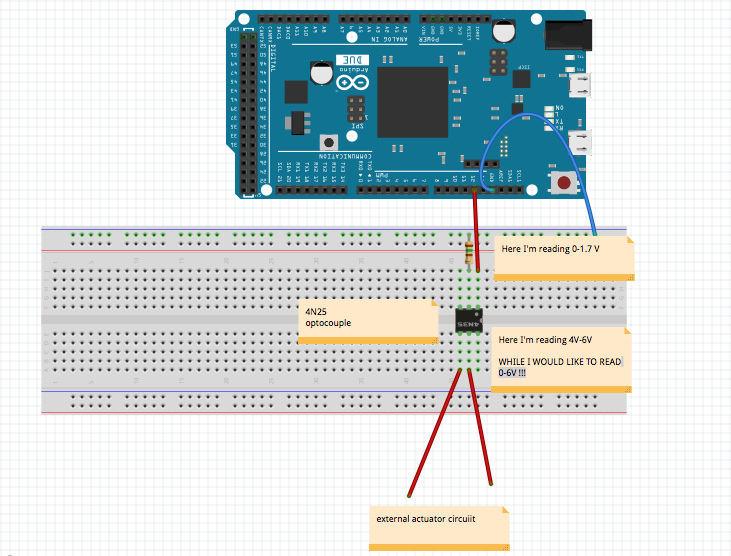 It sounds like the 4N25 opto-coupler on its own can't do what you need because it's not designed to directly make/break a connection between a power source and its load (i.e. it isn't functionally equivalent to a relay).

Internally, the switching functionality is provided by an NPN photo-transistor. A typical open collector usage would be something like this: 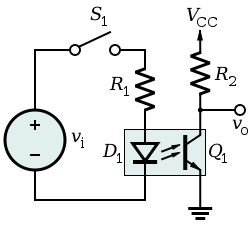 The switch (S1) and the power source (Vi) on the left would be your Arduino. All the connections on the right would be part of your device (the actuator).

As you can see, you need 3 connections on the right: voltage source (Vcc), ground, and the output (Vo, which goes to your device). The circuit basically works by pulling the output (Vo) either up to Vcc to turn it on, or down to ground to turn it off.

It looks like all you have is Vcc and Vo, so this kind of configuration won't work. (Don't try to use the ground from your Arduino instead. That could cause various other problems.)

It should be possible to setup additional circuitry to act more like a Solid State Relay, but without a ground reference point it can be harder than it sounds. A mechanical relay might be the easiest option.

Not the answer you're looking for? Browse other questions tagged arduino-due voltage-level relay or ask your own question.

19
How can higher current devices (motors, solenoids, lights, etc.) be controlled by an Arduino?
4
How to switch an external circuit with Arduino?
2
Arduino Uno rev 3 toggling a 230 V submersible pump on intervals
0
4 channel relay module reversed? Or is it my code?
0
Wrong analog reading
0
Relay module and internal pull-up resistors
7
Pin 13 fires relay when powering on… How to disable?
3
7805 powered Atmega328 Stops working when input of 7805 exceeds 7volts
0
Connect optocoupler 4N35 to Arduino Uno to control LED light strips
0
Detect if laptop is on or not?