How can I tell which fuses are set on an ATtiny?

Following on from this question, Problem with programming an ATtiny85: Error - avrdude: Yikes! Invalid device signature, if the response from avrdude is 0x000000 then the internal oscillator is probably not being used and an external one (be that crystal or clock signal) is required.

However, as this menu, from Engbedded Atmel AVR® Fuse Calculator, shows, there are a lot of options: 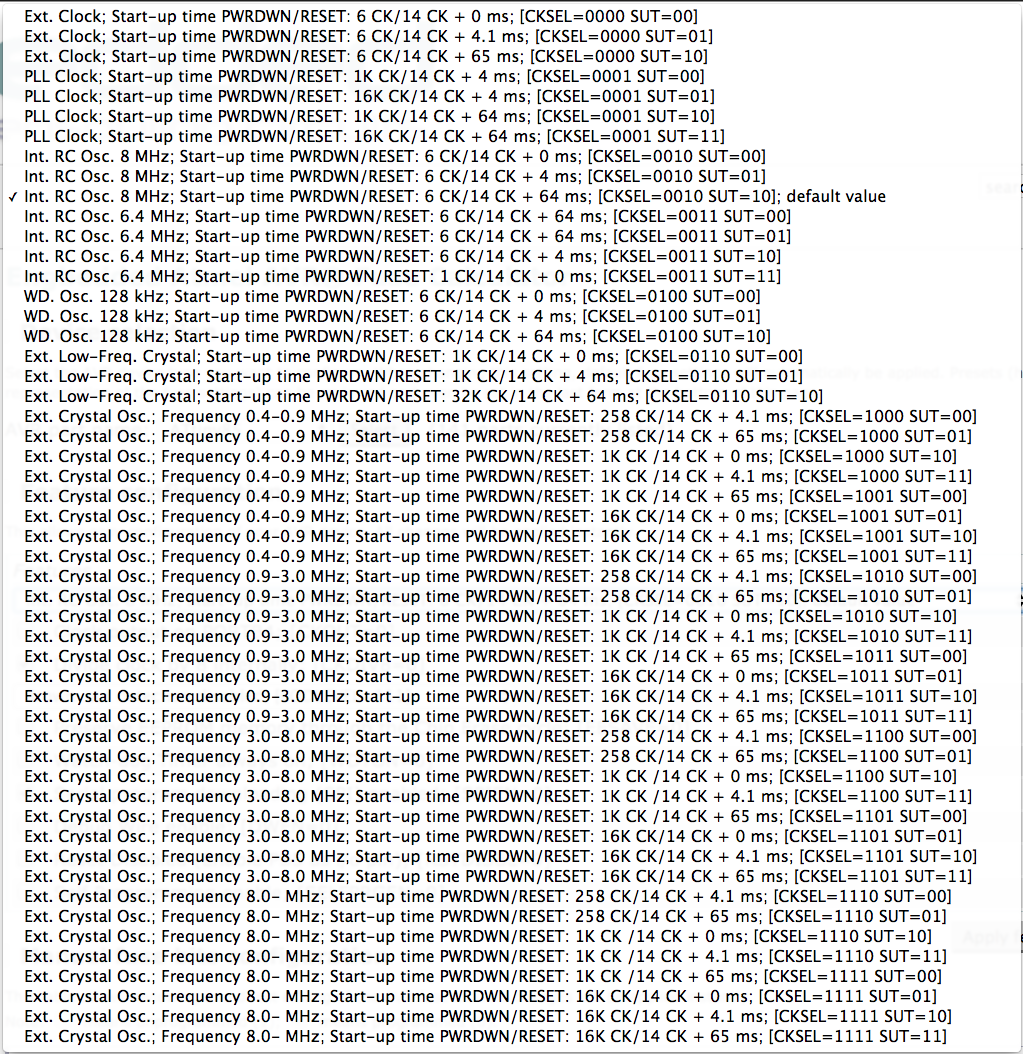 So, instead of having to configure circuits for each of the options, in turn, until the ATtiny responds, is there any way that I can read which of the CKSEL and SUT fuses are set?1

I am using a Nano/Uno as an ISP programmer, and the ATtiny is on a dev board like this (although it would be the same issue if I were to use a breadboard): 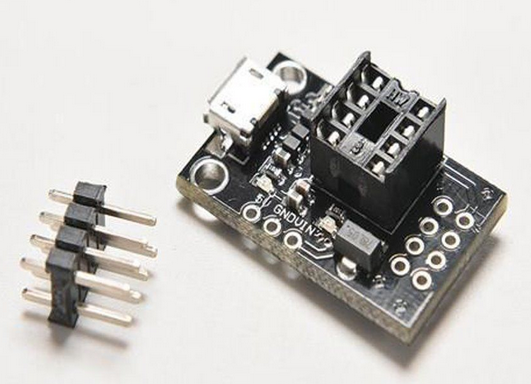 I know for sure that the connections are fine as I have checked them from pin to pin of the two ICs (ATmega328PU to ATtiny85), using a DMM.

I don't think that just connecting a crystal (and two ceramic capacitors) will work if the exact setting, i.e. external clock, has been selected. However, if a 16MHz crystal works for all, or any, of the external clock settings then that would be great, but I'm sure it doesn't work like that, as you can have a crystal attached but the it might not be used, see Does device signature 0x000000 mean the atmega is bad:

Even though you have a crystal connected, that does not mean it is oscillating. For example, IF you set fuses for "External Oscillator", that will turn the crystal oscillator off.

When I move the ATtiny85 to a breadboard and add a crystal (16 MHz) and two 22 pF capacitors, the error has changed for the better (at least now it sees that a ATtiny is connected)

When I add an external power supply to the ATtiny on the breadboard, following advice from Atmega (any chip) Device Signature issues and stk500_getsync()(resolutions), then unfortunately the device signature in the response returned by avrdude reverts back to 0x000000 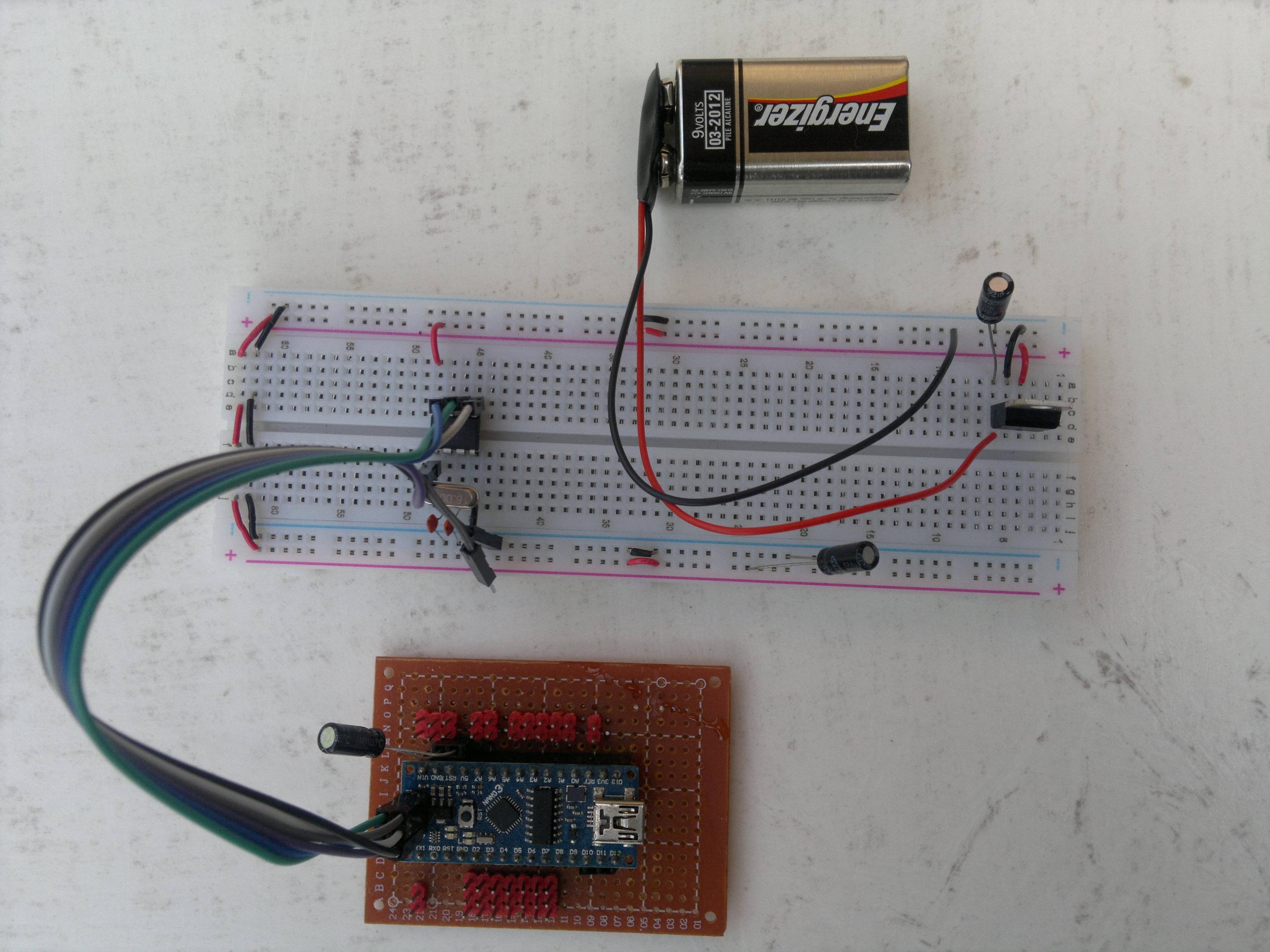 1 This is, admittedly, a bit chicken-and-egg, as if I can't communicate with the ATtiny, due to the incorrect clock setting, then how can I read which fuses have been set..? It's a bit like saying "If I don't have petrol in my car, then how can I drive to the petrol station to fill up?" - but I was hoping that there might be some sort of time saving measure

This seems to be an X -> Y problem, with X being the missing clock source on your ATTiny, which prevents communication.

If you have a second Uno or other AVR device, you can use that to generate a clock signal on any of the digital pins:

This creates a square(~ish) signal on Pin 13 with a frequency of 1.6 MHz. Depending on the IDEs optimization level (platform.txt), a frequency of 4 MHz is also achievable (at -O3 instead of -Os).

Connecting this to the XTAL1 pin of your ATTiny85 should allow you to communicate with the board. Make sure to interconnect all grounds.

You need a Programmer that connects to the ISP pins

The programmer will hold Reset low, then communicate via the SCK/MOSI/MISO pins to read/update the fuses, read/program memory, and optionally read/program the EEPROM.

I use an older Atmel AVR-ISP MKii. Atmel stopped making them, there seem to be plenty of replacement choices available, and Atmel Studio 7 when I struggle with Atmega328P, '1284P, and 2560. I haven't used an Attiny in a project yet.

2
Attiny85 - Method to discard glitched ADC values?
0
How can I modify Arduino code to work with ATtiny85?
1
How to use -F option while Burn bootloader for ATtiny 85 using Arduino IDE
2
What is “tws_delay” and how can I use it? (with an ATTiny85)
0
ATTiny85 USB Troubleshooting. Device is not recognized when programmer asks to plug in device
1
Programming ATtiny85 with Arduino-IDE and an 8MHz external oscillator