I’m trying to use Arduino Nano to run my 5 V PC fan, which, I know it sounds crazy, it’ll be mounted on a piece of Tupperware that’ll control the airflow through it via the fan. However I have no idea how to code the Arduino, but I do know how to code other things when I’ve done it in class. The setup is a 5 V rechargeable lithium ion portable battery connected to the switch which would be connected to the Arduino, and when the switch is triggered/flipped it would allow power to the Arduino, boot it up, and trigger the code that would tell the fan to run at specific intervals. The idea for intervals is a result of the battery only having 23 hrs and 10 minutes of continuous battery life while powering the fan. The pseudocode would look something like:

Press bump switch, it turns on the Nano with the ensuing program. Twice an hour, the Nano starts the fan. The fan runs for 20 seconds to 30 seconds each time the fan is started. After a set of 48 on/off cycles have completed (24 hours), the Nano is set to sleep mode in order to save power. In order to restart cycles, user must press bump switch again.

I’m pretty sure I have the hardware side of things down but if I don’t please do inform me.

I’ve attached a picture of what it’ll approximately look like, with the battery at the left, switch in the middle, then the Arduino (not seen in picture), then the fan. 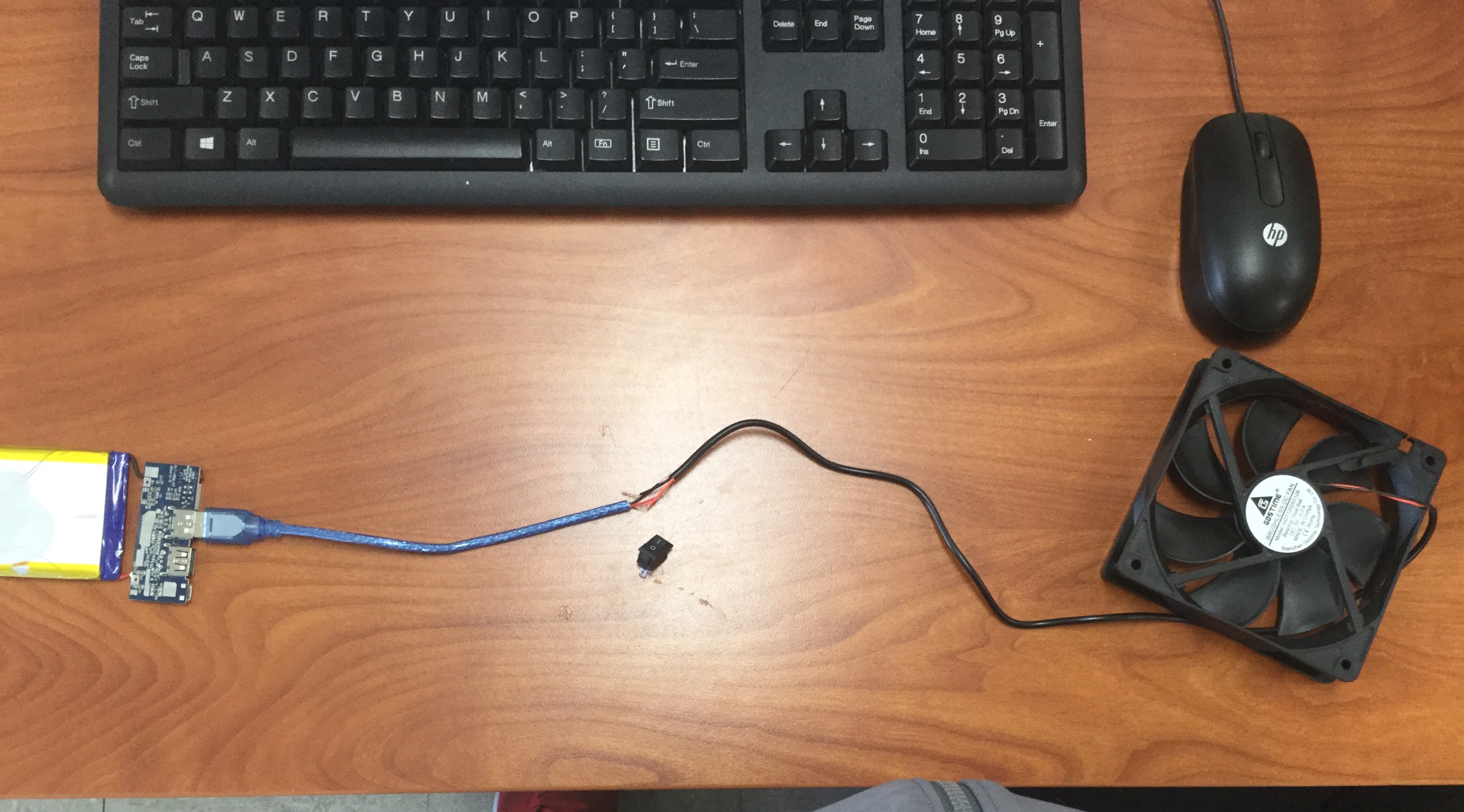 I know this is asking a lot when I don’t even know where to get started with the coding, but I’d be sincerely eternally grateful.

You can't run the fan directly from an Arduino pin. The fan will require to much current for that to work. Instead connect the fan, via a transistor/mosfet to the Arduino.

Also add a (flyback-)diode to the fan, as turning of the fan can create huge (but short) voltage spikes, which can damage the transistor/mosfet.

You could also put the Arduino in sleep mode, during those half hours, as well. You could use the LowPowerSleep library. Then replace the delay(ms) with LowPower.sleep(ms).

Lastly, some powerbank will automatically shut down, if the detect nothing is using power. The Arduino, without the fan on, will use so little current (compared to charging a phone) that such a powerbank would shut of.

Not the answer you're looking for? Browse other questions tagged programming arduino-nano sketch battery electricity or ask your own question.