Can't you easily use "quadrature" incremental rotary encoders at 2X or 4X their number of "stops"?

I bought a 12-step "quadrature" incremental rotary encoder as an input device for a project I'm working on.

When I wrote the code to track "ticks" of rotation, I made it respond to any change in the "A" pin. As a result, I got 24 steps, not 12. They appear to be evenly spaced, and still correctly indicate clockwise or counter-clockwise rotation.

It occurs to me that if I track changes of state in both the "A" and "B" pins, as long as I reverse the logic for identifying clockwize vs. counterclockwise rotation, I could get a 48 step count from the same encoder.

Thus isn't it straightforward to get 2X or 4X the steps from a quadrature rotary encoder simply by interpreting the signals differently?

Maybe the encoder you got is being incorrectly described? I have a handful of the little thru-hole rotary encoders popular in Arduino module kits and they have 12 detents for one rotation, but they are actually 48-position-per-rotation encoders. When I use them, I have to divide the tick count by 4 to have one physical "click" count as one tick in my code.

For some of these, it's fairly straightforward to open them up and remove the detent, and thus get a higher-resolution, smooth spinning encoder. Unfortunately, others, such as the ones I have, are difficult to open without destroying them, and since they physically snap to the detents, aren't usable at the proper resolution.

The method you note, where you track the high/low change in either direction of both outputs is the normal way to read quadrature encoders.

The answer to my question is yes.

Normally you only count the falling edge of one of the outputs of an incremental encoder as a pulse. That gives you the specified number of ticks for that kind of encoder - 12 ticks per turn in the case of my encoder.

If you instead write your code to respond to either rising or falling edge changes on one of the pins, you get 24 ticks per revolution.

If you instead write your code to respond to rising or falling edge changes on either pin, you get 48 ticks per revolution.

The code I came up with looks like this:

And the interrupt service routines (ISRs):

If you only set up one interrupt on rotaryPinA, the 2nd interrupt method never gets called.

The code above is specific to the Arduino Mega 2560 and other boards that have the same pin to register mappings. It uses interrupts so it doesn't miss state changes in the pins, and reads the pin states using port registers for speed.

Note that if you're only adding a falling edge interrupt you can skip the read of pin A (since when the pin state falls it will, by definition be at a logic 0 whenever the ISR gets called.)

To get this to work well I had to build the RC filter circuit described in the spec sheet for my encoder: 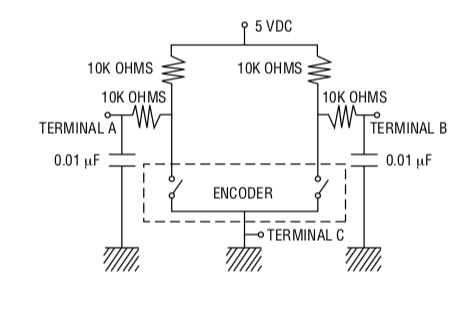 And I had to add Schmitt triggers between the filter outputs shown above and the input lines to the Arduino.

With those changes the readings from the encoder are quite good, although it still measure ± 1 tick or so per revolution for some reason.

I wish now I had bought the version of the encoder that has detents so it rotates in discrete clicks.

Not the answer you're looking for? Browse other questions tagged rotary-encoder software or ask your own question.