I saw a project on the Internet (the one in the photo), and I wonder, would it be a problem for me to connect the Vin and GND of the Arduino to the same place where the Servo Motors are being powered? (to power the Arduino together without having to connect it to another source or USB)

And if instead of the batteries I use one of those Breadboard Power Module (photo two) and connect a 12V / 1A power supply in it, would it have problem ? (connect the 4 Servo + the Arduino in it) 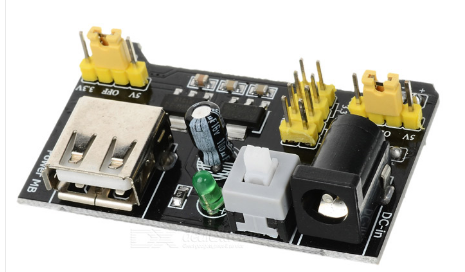 Please provide more information about the power module, or at least a link to it.

But you could supply 12v directly to the Arduino's DC-In barrel-jack. It's not ideal; the Arduino's regulator is likely to get warm, but it would work. This module looks like it regulates its input down to 5v or 3.3v (jumper-selectable). If that is so, then its 5v output would be just right for the Arduino's 5v-In pin. Just make sure your the motors and the Arduino are each directly connected to whatever supply(s) you use. What you need to avoid is trying to power the motors through the Arduino. Your first photo has it right.

After reading about the supply (using your link), I see that its output is limited to 700ma. Some of that will have to go to power the Arduino (you can use the power supply's USB port for that), leaving a little less for the motors. That will be marginal for one motor and insufficient if the motor is stalled or moving more than a trivial load. It won't be sufficient for more than one motor at a time without scheduling them to prevent simultaneous starts.

You haven't described your motors, so I looked up the Tower-Pro SG-90 hobby servos, one of the simplest and least expensive of the hobby servos. I found a very similar looking one (maybe a clone?) described as being similar to the Tower-Pro, the only one for which I could find current specs. At 5 volts, it draws 100mA with no load and 700ma when stalled. With a stalled motor, the output voltage would likely drop, possibly stopping and resetting the Arduino.

So bottom line is, this supply is marginal, even for one hobby servo in a mechanism that won't stall it. With a larger motor or a heavier load, I don't think it will do the job.

Not the answer you're looking for? Browse other questions tagged arduino-uno power or ask your own question.