Do I need a pull-up/down resistor for button LED circuit?

When reading up on how to make a circuit that turns an LED on when a button is held down, I keep finding people saying a pull up or down resistor must be involved, to avoid the flickering state of the LED seen with a floating pin. There's also code being implemented, where the state of a pin is read and monitored as the button is pressed down or left raised. What I don't understand, is why this is all necessary. Surely it isn't, considering the circuit below allows the button to be pressed with the LED turning on/off depending on the state of the button. 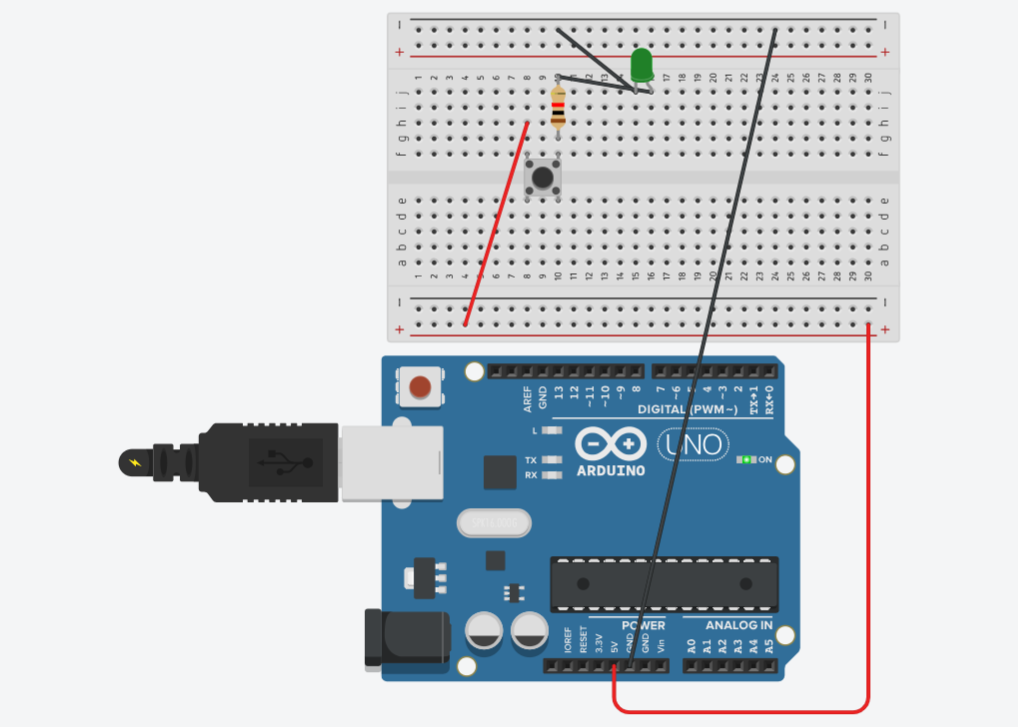 I made this circuit before drawing it online, and it works exactly as intended. No need for a pull up/down resistor or any code. I must be missing something here, can anyone please explain? It works perfectly with a buzzer as well.

The circuit you have made is only using Arduino as a 5V power source. You aren't using any GPIO pins to read the state of the button or to control the LED by an output pin. You've just made a plain-old circuit with a button and LED in series with a power source.

Often for a button-controlling-LED sketch, you will have a button connected between GND and an I/O pin defined as an INPUT_PULLUP, which means the Arduino will be able to read the state of the pin as HIGH (5V) or LOW (0V). The PULLUP part indicates that when the button is not completing the circuit between GND and the pin, a weak voltage is applied to get it up to 5V. In this way it's not "floating" at an unspecified voltage, but is being actively driven to 5V. When you press the button, the input pin is shorted to GND.

In the case of a pull-up resistor, reading a logic LOW means the button is pressed, which is kind of the reverse of your circuit operation, so in your sketch code, you would look for LOW to turn on the LED.

The thing to remember is that you don't put a pulldown (or pullup) resistor on the button - you actually put it on the input.

And since you aren't using an input there is nowhere to put the resistor.

A series resistor is needed to prevent excess current thru the LED or thru the IO pin. 270 ohm to 1K ohm works well.

The internal pullup in the Arduino processer is 30-50K ohm. The external resistor is a current limit resistor. (5V - Vf-led)/resistor = current. (5V - 2.2V)/270 ohm = 10.3mA. Vf of the LED will vary by color from say 2.2V for a Red to 3.5V for a blue or white. Insert values if known, or use a 270 to 1K resistor and measure Vf across the LED, then adjust resistor as needed for desired brightness (more current = brighter).

5
Why does my sketch report too many button presses?
1
Detect button on a ground line (reverse eng)
2
What is happening in this basic push-button circuit?
3
Interrupt routine for button somehow respondng to room lamp turning off and on
0
Get when a button close the circuit
1
State Machine Logic problem with added states monitoring safety switches
0
Using the LED pin for input