Arduino Uno ADCH register stuck at 255 when read from ISR

I'm working on a project that will essentially become an oscilloscope in the long run. I am following this guide. My code is uploaded here for more reference.

In my .ino file I have called functions to set up register such that I have a timer ISR called at a frequency of 100 KHz, and an ADC clock rate of 2 MHz. The ADC is also set so that the result is left shifted so ADCH contains an 8-bit result. In a separate .h file I have an ADC ISR that looks like this:

The loop() function is the following:

So, when the ISR is called the flag is set to true, and in the loop() function I am notified with an "ISR HIT" printed on the serial monitor, this operation is successful.

However, I also have a volatile global variable in my .ino function called data_byte (also declared as an extern in the .h file) that I set byte1 to. When byte1 is printed to the serial monitor the result is:

Any ideas on why the value of ADCH is stuck at 255? My hardware is simply a light sensor connected to pin A0, 3.3 V, and GND.

It would seem the problem lies here:

According to the datasheet, the bits REFS[1:0] of the ADMUX register select the voltage reference as:

Settings those bits to zero means that you are now supposed to provide your own reference through the AREF pin. If you want to use the 5 V supply as a reference, you should set them to 01. This is confirmed by the block schematic. Here is the part of that schematic relative to the reference voltage: 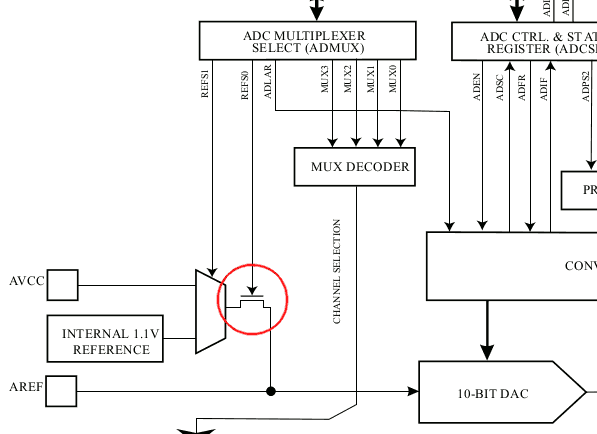 When REFS0 is zero, the highlighted transistor does not conduct, hence the only way to provide a voltage reference is through the AREF pin.

Not the answer you're looking for? Browse other questions tagged arduino-uno interrupt adc analog-sampling digital-analog-conversion or ask your own question.