Unexpected result with the GSM module A6

I have a GSM A6 module, like this one.

I'm going to use an Arduino Nano as a bridge to communicate with it, I have an external power source (since I read that this module can consume up to 2A at its maximum consumption) (this power supply shares the GND with the module and the Arduino) and I upload the following code in the Nano:

I set the baud rate at 115200 of my SoftwareSerial port (connected to 10 and 11 pins on the ArduinoNano) because (even if the module says that it has auto-detect speed hability) doesn't work if I set the speed at 9600 (or any other), and I modified the SoftwareSerial library for expand the buffer from 64k to 512k (trying to solve this problem) following this page instructions (also: NICE WORK in this page!!!).

And it works ... it works relatively well, I mean: The AT commands to test (according to the datasheet itself) are AT and ATI (in one I recieve "AT /r OK" and the last one give some usefull information like the OS and other things), and they work, only they do not show me the same answer always, I leave screenshots: 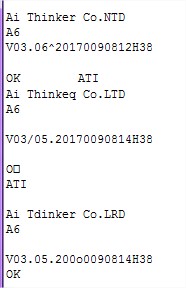 As you can see, the answers are not always exact, there is some garbage characters, and I need them to be exact, because my idea is to create a kind of alarm, in which the Arduino (One, Nano or Mega) sends and receives AT commands. I worked with the SIM900 module before and always received the same answer when I sent an AT command.

Apparently the SoftwareSerial library have some limitations, so I change the baudrate communication in the moduel ussing this sentence:

And change the code that I upload to the Nano, changing the baudrate speed in the declaration, from:

And now all is well :D

Not the answer you're looking for? Browse other questions tagged gsm softwareserial or ask your own question.

7
Difference between SoftwareSerial and Serial
1
SoftwareSerial with ESP8266
1
SMS Receiving problem - Arduino Uno and SIM900A GSM Module
1
Arduino to read from RS232 converter to TTL serial module (updated)
2
What is the best delay to use between characters sent to the serial port
1
Arduino Uno + SIM808 EVB 3.2.4 not working properly?
1
SIM800L module on Arduino nano