Where is my BUG?

Thank you everyone for help on my last post, i managed to make it work. I still keep trying to craft my skill with the arduino. This time I need to make a coffee hot plate simulation. When the sensor is not up to temp an LED will blink, once the sensor gets up to temp the LED will blink but turn off (go to low) after five seconds. This is the code i am working on. The sensor is at temp and the LED is still blinking instead of turning off. When its low it blinks as should. I think the bug is in the millis() portion of code. Any ideas would be greatly appreciated. I also ran the println screen, and the temp is consistantly around 210-220.

First, let me point out a few technical issues with your program:

There is also the issue, already pointed out by PhoenixRevealed, of your code defining two thresholds, while your prose only mentions one. This may well be just you being sloppy and not describing your requirements precisely enough.

Next, and since you are interested in perfecting your learning process, let me advise you on two techniques that are worth learning, because they are extremely useful for mostly any Arduino project more complex than just blinking an LED:

Here is my interpretation of your requirements in terms of a finite state machine: your Arduino can be in any of 3 states: COLD (initial state, the plate has not reached the required temperature), WAITING (the plate reached the temperature and we are delaying five seconds), DONE (the five seconds have elapsed). The rules for changing states are:

Here is the corresponding state diagram: 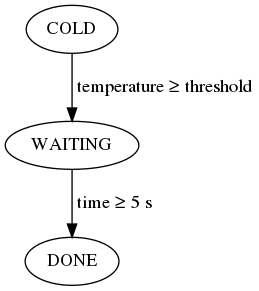 I tried to implement this state diagram in code, using the traditional switch/case construct. But then I got lazy and noticed that calling exit() is the easiest way of implementing the DONE state, as this function is precisely designed to get the program stuck in a do-nothing state. Then, since there are only two states left to care about, a boolean can be used as a state variable. In the end, the code I propose may not look like a finite state machine. However, it is important to notice that, event if such case, the finite state machine is a very useful concept for thinking about your program and writing down its requirements.

Personally I would rewrite it like this, both for functionality and readbility...

A couple of points about this implementation...

Not the answer you're looking for? Browse other questions tagged arduino-uno programming or ask your own question.