My Arduino IDE is not getting started. It just crashes before opening up. I don't know what the problem is. It was working well enough before without any issues.

This is what I see after running the arduino_debug.exe in the command line 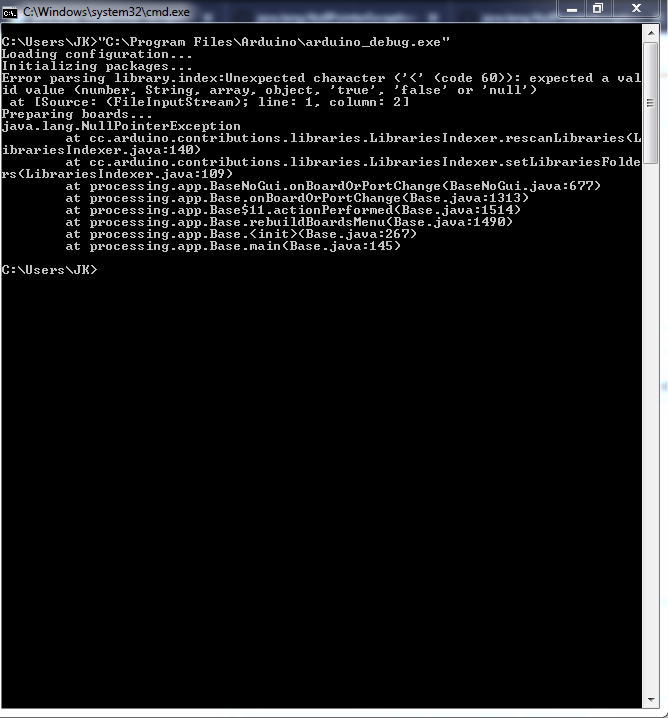 Note: I added a library (DHT) to work with my humidity and temperature sensor and since after then, this issue comes up. I tried to reinstall it like more than 7 times, but the issue still persists.

Please help me with it. Thanks.

The cause of the problem is that you have a corrupted library index file. The solution is to delete the file, which will force the Arduino IDE to download a (hopefully) uncorrupted fresh version from the Internet:

For anyone encountering this problem who is using an operating system other than Windows, the location of library_index.json is different:

If using the Arduino IDE in portable mode:

The issue of a corrupted library index file preventing the Arduino IDE from starting has been reported to the Arduino developers and they are already working on a fix:

In my case, deleting just the library_index.json was not enough but a good hint.

I did also delete the subdirectories of "packages" directory (boards which I downloaded- the ESP32 board and the ESP8266 board), and all files (not folders) in C:\Users\\AppData\Local\Arduino15\ except the preferences.txt

This solved the issue for me.

I had the same problem this morning when trying to launch the IDE (1.8.3). I'm running Linux Mint 18.

Running the IDE from the command line showed the following errors:

0
How to prevent the Serial Monitor from closing upon re-uploading sketch?
1
How can i read serial data into a string until a certain character is recieved?
3
What would be the architecturally-right place to put custom -D defines?
1
Standalone ATMEGA328: Verification mismatch on random byte on -subsequent- uploads only
2
How do I create global pointers with low memory overhead?
0
Invoke a method in the main sketch from within a library