This question does not appear to be about Arduino, within the scope defined in the help center.

Well you'll need to know the true maximum current for the pump. It may say 1HP (746 watts), which you'd like to think came out to a simple 3.5 amps. But there are a few other factors to consider, such as motor efficiency and power factor to name a few. You can see where if the efficiency were only 50%, you'd need to consume 2X the power to get that 1HP. Also, if the power factor were 60%, it would mean the 746 watts become 1243 VA (volt-amps), which would put you above 5 amps, and that's before efficiency concerns. Then there is the initial surge... how much current is drawn for the short interval during startup.

So what you need to do is really examine the name plate data on that pump. I've actually just done something like this (controlling a water pump for a pool), and I looked at some of those relay modules too. I personally like to see relay contacts that are at least 3X the expected run-time current when controlling a motor. And in the end those modules just did not offer enough extra safety margin for me. But you can make your own analysis.

What I ended up using were some low cost OMRON LY4F-DC12 relays. They have 4 10 amp contacts, and I had a conversation with an OMRON engineer about using the contacts in parallel to create one 40 amp relay, and he confirmed it was a workable solution. Here's one at Mouser Electronics, shown with a mounting socket. You can safely drive this relay forever with a cheap 2N2222 transistor and a 12V supply, provided you put a revers blocking diode across the relay coil. then, put about a 1K resistor between the 1000 the arduino pin and the transistor's BASE pin. You need the transistor (or a MOSFET) because the relay needs about 100mA to operate, and because the coil needs 12V. I know you didn't count one a separate supply, but you can only push the arduino's 5V supply so far. And 12V switching supplied, good to 300mA, are small and can be had for a couple of bucks. Those supplies can also be powered with anything from about 90VAC to about 250VAC, with no mods.

Here's a piece of a schematic from my own project. It's ugly, but you get the idea. The bottom line is that with my motor, which i expected draw a maximum of 12 amps (mine is 125VAC), I can sleep easy knowing this relay will probably outlast the motor! 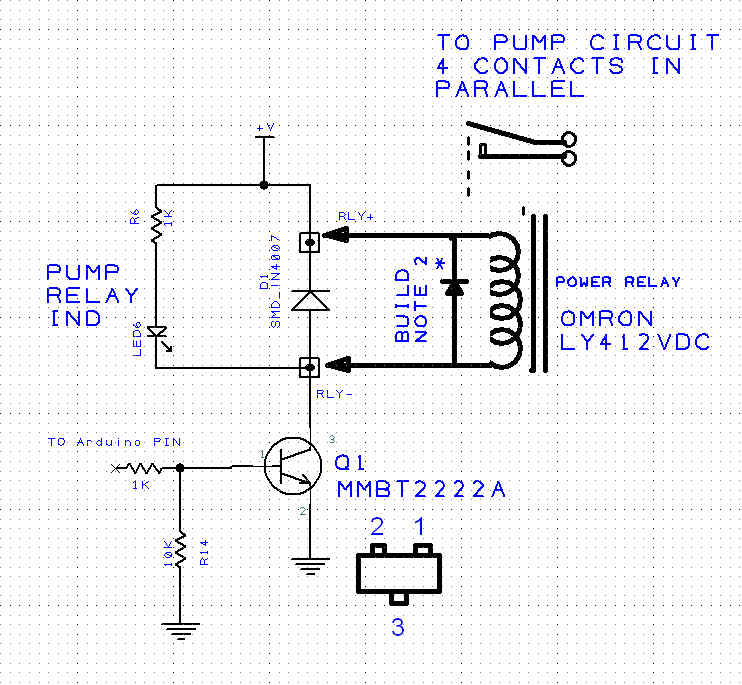 Not the answer you're looking for? Browse other questions tagged arduino-nano motor relay or ask your own question.