I simply burned the code written below but it is showing me irregular behaviour.. as in output's last paragraph, free memory increases after a runtime allocation, how it is possible? The output is attached : 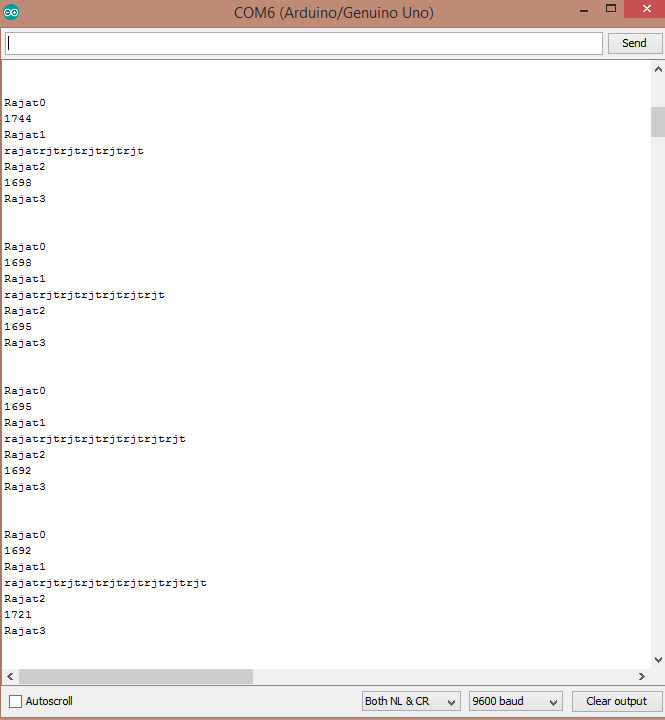 Free memory can be found in two forms:

There are various versions of the MemoryFree library. The simplest ones only report the main chunk between the heap and the stack. The more sophisticated ones walk the malloc()'s free list in order to also count the heap holes. Which approach is better? I would argue that the naive version is fine, as heap holes is something you should not count on, because it is never guaranteed that a particular allocation will fit in any of those holes.

You are visibly using one of the naive versions. As you grow your string, the object calls realloc(), which in some cases copies the string's character array and frees the original one, potentially creating a heap hole. Eventually, small holes can coalesce into a larger one big enough for the next allocation, and realloc() can end up using this large hole and freeing the chunk at the top of the heap. When this happens, the heap shrinks, and the main chunk of free memory gets larger, which is what freeMemory() is reporting to you.

In summary, it's normal and expected behavior. If you want something less surprising, use a version of the library that does count the holes. But then you may run into a more displeasing surprise: a heap–stack collision, or an out-of-memory condition, can happen even with loads of memory buried inside heap holes.

Not the answer you're looking for? Browse other questions tagged programming arduino-ide atmega328 memory-usage memory or ask your own question.

6
strange behaviour of dtostrf()
2
Prevent hardware and library examples from showing in the Sketchbook menu
0
Shared Memory using SHM Library
0
Arduino sketch unexpected behaviour
0
freeMemory() function from memoryfree library not returning decreased value in arduino UNO
1
Timer 1 COMPA ISR - default behaviour?
12
Why is it considered bad practice to use the 'new' keyword in Arduino?
0
Ardutester Millenium I2c Lcd Not Showing Anything!
5
Does the compiled binary of a sketch include uncalled functions from a library?