I am having trouble with my digital sound sensor. My goal: Clap 2 times and a led goes on. So I wrote this code. I don't know if it is correct or not. This happens: If I clap, from the serial monitor I don't get one HIGH, but a few (I tried changing the sensitivity of the soundsensor, but it doesn't help), but in my code I have some conditions where only 1 HIGH at a time is allowed. Thus, I don't know if my code is incorrect, or my sensor isn't working well. Can you guys help me please? This is my code:

Here is a "stripped down version" of a sketch I used to replicate the Clap On, Clap Off lamp switch we had in the 1980's. It works with the KY-038 sound sensor module you currently have. You will need to install the VirtualDelay Library.

The sound sensor module is very sensitive. A quarter turn of the potentiometer around the "sweet spot" makes a huge difference. Too sensitive, and the digital output is constantly high. If it's not sensitive enough, then you have to physically "tap" the microphone to get a high/low transition out of it.

Please note: This sketch uses delay() which is "blocking code" and it's use is usually not recommended.

EDIT: To answer your question regarding the multiple High to Low transitions from the module's digital output, you can use a DSO to look at the relationship between the analog and digital signals it produces.

In the following image, the digital signal (yellow trace) and the analog signal (blue trace) are superimposed over each other. The white dashed line (E), is set to 2.8 VDC which is approximately the analog output pin's voltage with ambient room noise. Once you clap in front of the microphone, this wave form is generated. 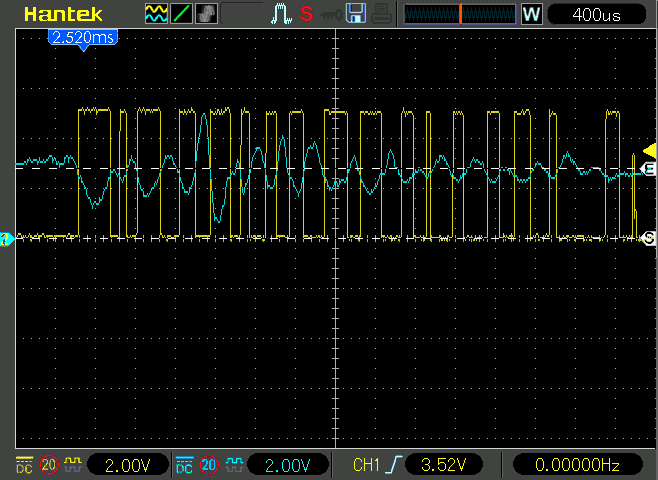 The problem is, the sound of a person clapping generates a noisy signal and the sound sensor module does not know the difference between noise and the sound you want to trigger it.

Your logic is flawed; you don't have any delay between readingState and readingState2 other than a serial.Print() which you shouldn't rely on for a delay.

You need to keep track of state in your loop. You need to capture the time of the first input, see it go low, then record the time of the second input. N.b. time between instructions is blindingly fast even on 'slow' proccessors.

Not the answer you're looking for? Browse other questions tagged arduino-uno digital sound or ask your own question.

0
Buttons and LED
0
Extracting high and low bytes from long
0
How to set counter for two ultrasonic sensors?
0
Arduino code to control 4 led's from 4 buttons
0
How can I scan for a HIGH signal on digitalRead during the main loop, while running other things?
0
What's wrong with my codes/
1
having problems with my arduino bluetooth car project(with L298n Motor Driver)