I'm using a 2N2222 transistor as a low-side switch to turn a 5V computer fan on and off with an Arduino digital pin, which responds programmatically to a button press - i.e. the relevant digital pin is switched from LOW to HIGH for a determined time in response to a button press recorded on A0. 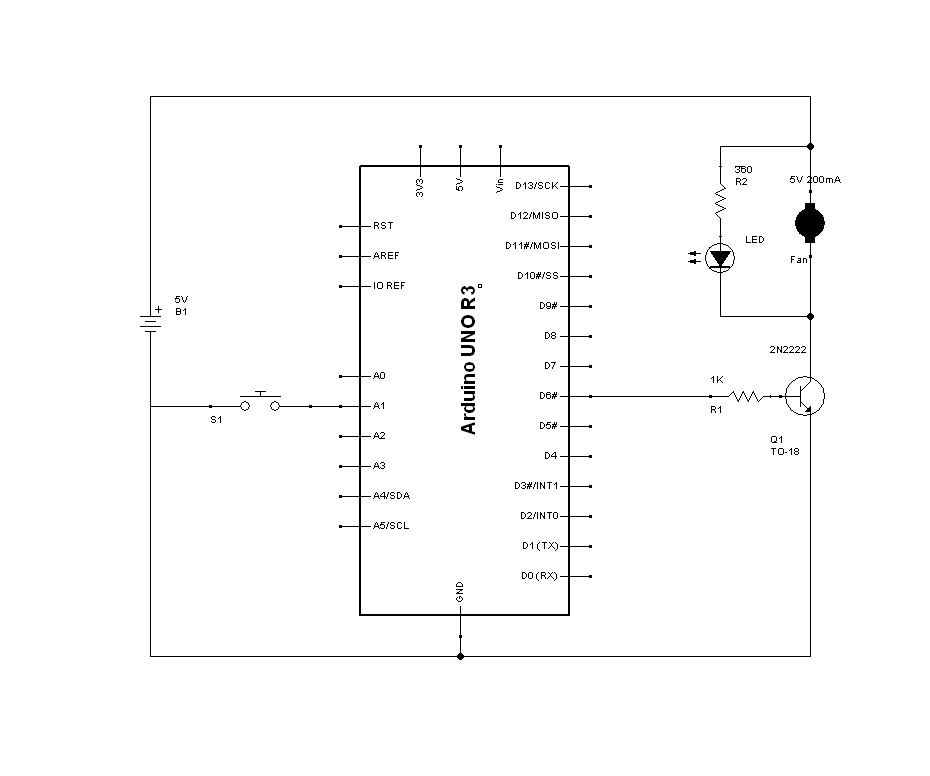 And here's my code:

For simplicity, I'm showing a separate button component in the diagram, but I'm actually using a button that's wired into an LCD shield.

My expectation is that, when I press the button, the digital pin wired to the transistor's base will cause the transistor to close the circuit and turn the fan (and LED) on for five seconds.

The problem that I have is that the Arduino's digital pin doesn't seem to be able to saturate the base, so not enough current passes through the transistor to power the fan. It does turn the LED on and off as expected, but the fan needs much more current than the LED. If I take a wire directly from VIN or the 5V pin and touch it to base (through a resistor, of course), it does succeed in saturating the base, and the fan turns on. Measuring the current from VIN (or the 5V pin) to base, I get 4mA, so my assumption is that 4mA is sufficient to saturate the base. My understanding is that an Arduino digital pin should easily supply this. But in my case, the current from the relevant digital pin to the transistor's base never goes higher than 1.4mA. I've tried different pins on the board, but always get the same result.

So the question is, why does the circuit work as expected for the LED, but not for the fan? Any help/suggestions will be greatly appreciated!

To fully turn the transistor on you should give the base somewhere around 1/10 to 1/20 of the collector current. If you read the datasheet for the PN2222 (a highly recommended activity) you will see that Vce(sat) is specified with Ic/Ib = 10.

Now, the Microchip ATMega328 MCU chip in many (but not all) Arduinos is capable of sourcing 10mA or 15mA with minimal drop (assuming a 5V supply), again this information is available in the MCU datasheet (Figure 31-71 on page 355).

So it appears you are using an "Arduino" with some other MCU. In which case you can either use another transistor to boost the current or substitute a logic-level MOSFET.

Based on the description of your circuit, it sounds like you might not have connected the Arduino's ground to the "negative rail", the same part of the circuit where the transistor's emitter is connected. You must make that connection in order to properly bias the base-emitter junction of the transistor.

You really should draw a schematic for this sort of question.

I seem to have solved the problem. As mentioned in the question, I was using a button wired into an LCD shield. As the LCD shield occupies all the header pins on the Arduino, the LCD shield helpfully provides circuit connections for the unused Arduino pins. It seems that the LCD shield I was using has some fault which only allowed limited current to flow from the corresponding Arduino pins. This would explain the anomaly that only the LED lit up as expected, but the fan failed to work: presumably the weak current into the transistor's Base created sufficient gain to power the LED, but not the fan. Eventually, after many attempts at getting the circuit to work, even the LED stopped working and that's when I realised that there must be a continuity problem with the header connections. So, removing the LCD shield and wiring everything directly into the Arduino with a separate push button, everything started working as expected. Many thanks for all the helpful replies. I've got a much better handle on how BJTs work now!

You should also have a diode across the motor, cathode to 5V and anode to the transistor. When the transistor turns off, the motor will try and keep the 200mA current flowing. The diode lets that current dissipate. Without it, you can get a high voltage spike at the transistor which can damage it.

2
Bizarre transistor behavior and voltage with DC motor in simple circuit
2
What are the logical errors in this piece of code?
2
Use transistor to press button on external device
3
Arduino auto power of circuit possible issue with higher voltage agains output pin?
0
Arduino code to control 4 led's from 4 buttons
1
having problems with my arduino bluetooth car project(with L298n Motor Driver)
2
What's the best way to operate a remote control circuit board?