Edit:
Another weird thing happened, I removed all the pinMode and digitalWrite statements do my setup() had only Serial.begin() and lcd.begin() and I only had the lcd connections. Now I put this code to print into an function called lcdprintMove() and there were other functions too which were performing other tasks when I ran it as such I got weird characters in the LCD but when I removed all of the other functions,the lcd printed fine. From this I was able to conclude that this problem can't be because of the supply but has to be something else. But I still can't figure it out.

Today I commented all the digitalWrite statements and uploaded the program and it worked! So, I am going to connect the lcd onto a separate arduino and communicate serially. Someone suggested the solution of putting a cap to ground and buff the power of 5 v pin can you explain this in more detail.

Circuit diagram Note: Rs is connected to pin 7 and E to 6 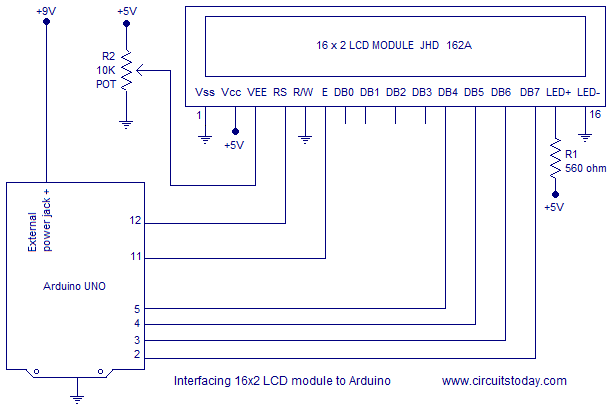 The capacitor between 5V and GND effectively acts as a small battery. When a sudden demand in a current relatively large occurs, the system can get that extra small amount from the cap and not experience a voltage drop.

Not the answer you're looking for? Browse other questions tagged arduino-mega lcd or ask your own question.