I'm using the TLV493D-A1B6 sensor connected to an Arduino Uno: I've attached all necessary documentation at the bottom.

This is a 3D magnetic field position sensor that detects the magnetic field strength of a nearby magnetic field in the X, Y, and Z directions. I am NOT using the 2GO evaluation board. The sensor uses I2C protocol for communication.

I have this sensor all wired up, soldered correctly to a PCB with pinheadings, and ready to go on my breadboard. Also, I am using a bidirectional logic level converter that is recommended for this sensor. I can confirm this as the I2C scanner sketch detects the sensor and prints out its expected defulat address.

Specifically, I am having trouble understanding the data sheets and how to setup Arduino using the 'Wire.h' library to communicate with the sensor over I2C to obtain the X, Y, Z RAW/decoded readings continuously.

I have even tried code from Github for this sensor: https://github.com/IRNAS/TLV493D-3D-Magnetic-Sensor-Arduino-Library/blob/master/TLV493D/TLV493D.h

I've written my own code and have failed vigorously to get anything but random, clearly wrong readouts, this was my latest attempt, I chopped this code down for simplicity and clarity. I've also tried variations using the I2C.h master library, but no luck:

And furthermore, I understand that these values needed to be decoded to make sense of the actual data, I have no idea what is going on the register map sheet and why they are shifting different bits of segments of each byte, seemingly like totally picking the bytes apart then reordering them, and then casting them as integers to get real data?

In your code you read only the 3 first registers and write them to the variables Bx to Bz. These registers correspond to the correct magnetic values, but only the highest parts of them. The sensor measures 12-bit values - due to the higher precision - , but one register can only hold 8 bits. So the big 12-bit values are splitted into two parts. You will have to read all parts and put them together correctly to get meaningful results. Also the format of the values is a signed 12-bit value in two's complement, meaning that the decimal value is calculated by multiplying the value of the 12th bit with -1. You will have to convert this to a 16-bit two's complement for using the int type.

In the following part I will use the bitwise AND ( & ), the bitwise OR ( | ) and the bit-shifting operators ( << and >>). I will only shortly explain, how to use them. If you are not familiar with them, please refer to a proper C/C++ tutorial, which can explain this in more detail than this answer. 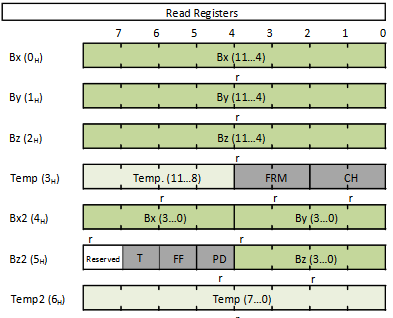 Now we put together the splitted values in one variable each. To avoid complications with types, I use unsigned int here, which is like byte, but containing 16 bit. For Bx we have to shift the high part 4 bits to the left, since the lower part needs 4 bits of space. Also we have to seperate the lower parts of Bx and By. Since the lower part of Bx lies in the highest 4 bits of the read value, we need to shift them right for alignment with the least significant bit. The rest works similar, but is a bit easier. The temperature value uses another alignment, but the principle is the same.

Now we have packed the 12-bit values into 16-bit unsigned integers. We now have to convert them to 16-bit signed integers. But if we simply cast them, this would result in false values, since the complemented bit here is the 16th, not the 12th like in the sensor. For solving this we use the answer from this question:

There is one difference from the answer: We have a 12-bit two's complement, not a 14-bit one. So we have to shift 4 bits, not 2. This corresponds to dividing by 16 (a factor of 2 for each shifted bit).

Now you should have the correct measured values from the sensor.

You may have a second issue with your code. It read the registers every second, without regard to the state of the sensor. The datasheet says:

This sensor does not incorporate shadow-buffers for readout. Thus, it is mandatory to read the sensor data not during a running conversion to avoid corrupted reads.

So you might also get garbled values because you sometimes read the registers during the sensor writes in them. This may be not a great issue here (maybe it only happens once in a while). But you can circumvent this problem by either using the INT pin of the sensor for triggering a I2C read operation (at best via an interrupt) or by configuring the sensor to run in the "Master Controlled Mode", where it only does a new measurement, when the old values have been read from the registers.

Not the answer you're looking for? Browse other questions tagged arduino-uno sensors i2c communication or ask your own question.

5
Why use a module rather than sensor directly?