I built my own Arduino UNO for a project at school. I think I have got the USB bootloader and Windows drivers all situated as the UNO shows up as an UNO in the device manager. When I try to load a sketch I get the error: avrdude: stk500_getsync(): not in sync: resp=0x10. (previously I received the same message with the message ending with resp=0x00)

I loaded a serial echo program using the ICSP and sent the message "serial test" to the UNO. I received this message back: {u{m}o¿wu{w

Can anyone help me troubleshoot this problem as I have ran out of things to test or look into.

Edit: Added requested pictures of TX and RX. These were taken at Pin 0 and 1 of the headers. The scope showed the same results at the pins of the 328P but I couldn't operate the scope and hold the probe at the same time. 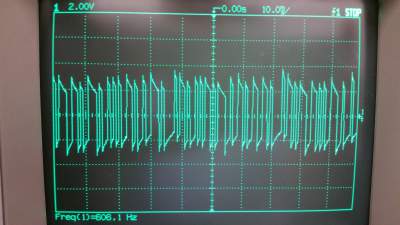 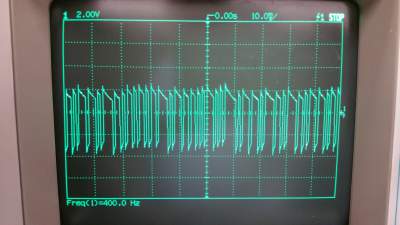 Sorry for the delay. I posted this question on the EE board as suggested and forgot to come back here and close this out. It was an issue with the fuses. My initial attempt to setup the 16u2 missed the step where I was supposed to change the fuses. I thought this was accomplished when loading the firmware, but was mistaken.

From the scope picture it appears you have a ground problem. All the grounds must be connected together even the scope. It appears like you have a pseudo phantom ground via the mains power system. Did you set the baud in the uno with Serial.begin(your baud rate);? The baud must be the same on both ends. For a check you should get a UNO and see if it works with that the problem is your board. Also be sure Tx on the UNO goes to RX on the receiving end and visa versa.

150
"avrdude: stk500_getsync(): not in sync: resp=0x00," aka Some Dude Named Avr Won't Let Me Upload My Program
98
Have I bricked my Arduino Uno? Problems with uploading to board

0
How to flash the "atmega328" with AVRDUDE?
7
Programming Chinese Arduinos
1
HC-05 Bluetooth Module Blinking Red Light-Arduino Uno
0
Will a genuine Arduino board have the same issues with High Sierra as other non genuine ones?
0
Can the arduino be recognized if the usb chip is broken?
2
Change the fuses of an Arduino Uno (can an Arduino Uno change its own fuses?)