Writing "theremin" outputs to a MIDI file on an SD card

I am making a musical instrument (theremin simulator). I want there to be a "record" capability which stores the volume and note the user is playing, into a MIDI file. Note this doesn't actually record audio, just data for the frequency and volume at a certain point in time.

So far I've done some research and have found how to play MIDI files (which is useful and I plan to take this on as well) and read/write to SD cards. However I haven't found a source which allows me to create and produce MIDI files.

How should I accomplish this feature?

Also: I am recording from a self built replica of a theremin, which is basically two ultrasonic sensor readings for volume and pitch. Is this "too basic" for a MIDI file type? (Edit: I guess this is too advanced)

EDIT: This project has been abandoned because of no good way to play between semitones (i.e. at specific frequencies), which is what I need for my theremin. Although there is the pitch bend functionality, the amount of pitch bend translates to different frequency changes based on the receiver.

Instead, I will create my own custom file to achieve the record/playback, because using the pitch bend + note method using MIDI is just too much work and it won't be compatible with other devices anyway.

Nick Gammon's answer is really thorough for those who only need to record/play specific tones and semitones in MIDI format.

The short answer would be "yes, it is possible". There are lots of gadgets around that record MIDI. They would have microprocessors in them, and they would have something like an SD card, which itself is like EEPROM in concept.

You may possibly have problems with storing the notes in RAM, and then writing them to the SD card fast enough not to lose some. Knowing the rate at which notes would arrive, the speed of the SD card, and the type of Arduino would help to answer if your specific case was likely to work.

I wrote a sketch that reads MIDI which shows that it is certainly possible to receive MIDI data and display it. Video of it running is here.

I don't personally know the format of MIDI files, but it is well documented.

Writing to SD cards is well documented. Making your idea work would be a case of taking stuff (like my code to decode MIDI), code to write to SD cards, and knowing the correct format.

Your basic technique would need to be (as suggested by gabonator):

Example of producing a MIDI file

This example code writes out a MIDI file. As an input device I used a 16-key keypad like this: 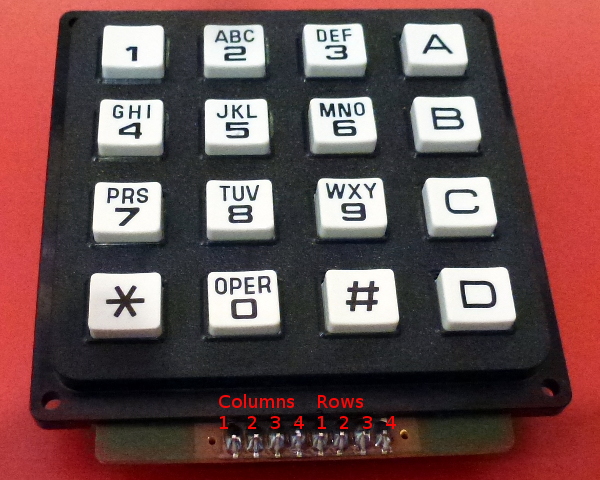 The columns were connected to pins 0, 1, 2, 3 of the Arduino Uno, and the rows to pins 4, 5, 6, 7. This makes the ribbon cable from the keypad keep the pins in a natural order. If you use different pins just change the keys array in the sketch.

The library for keypads that I used is available at https://github.com/nickgammon/Keypad_Matrix

Using a keypad matrix is logical, because most keyboard devices would use a matrix, to reduce the number of wires you have to run.

Note that the matrix needs diodes wired for each switch as described here because otherwise if you press 3 or more keys at once you will get "ghost" keys.

In my case I opened up the commercial keypad and soldered in the diodes.

I also used a Micro-SD breakout adapter, connected to the SPI pins of the Arduino, like this: 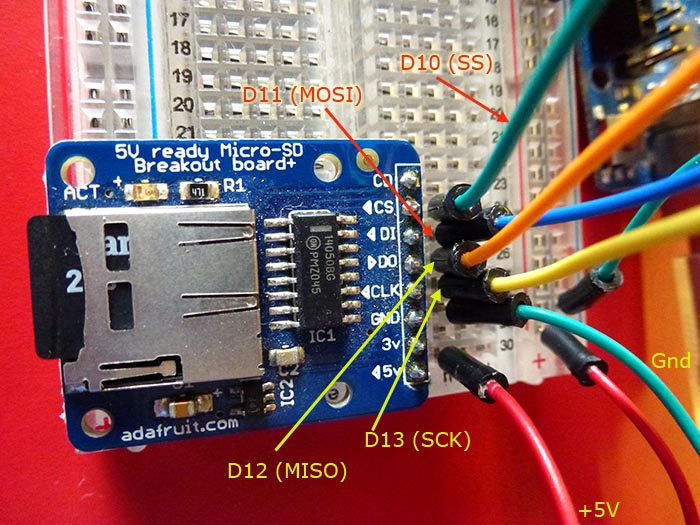 The SDFat library was an archived one that I keep here: http://gammon.com.au/Arduino/SdFat-master.zip (2.2 Mb)

Unzip that file, and from within the folders inside it, copy the SdFat folder into your "libraries" folder (which is under your Arduino sketchbook folder - not inside the Arduino application folder). Then restart the Arduino IDE.

The code definitely compiles with that (with a handful of warnings). The later library from https://github.com/greiman/SdFat may be an improvement but I haven't tested that.

To keep track of file numbers I used the EEPROMAnything library, a copy of which can be found at http://gammon.com.au/Arduino/EEPROMAnything.zip

Each time you start a new recording it adds one to the file number, which wraps around to 0000 once it reaches 9999.

You can choose a MIDI instrument by changing the line:

I am recording from a self built replica of a theremin, which is basically two ultrasonic sensor readings for volume and pitch. Is this "too basic" for a MIDI file type?

It looks like this could be possible by using the MIDI "pitch bend" message. You would need to determine where your note value was (presumably most of the time between the natural notes like C and C#) and then send a bend message or "Pitch Wheel Change" (0xE0 for channel 1) to modify the main note. The main note would need to be updated if you moved more than a couple of semitones away.

Not the answer you're looking for? Browse other questions tagged spi sd-card audio midi or ask your own question.

6
arduino creates strange files in SD card
3
Arduino clone CH340G (ATmega328P), MIDI over USB
2
Using a MIDI connector both as MIDI In and Out (not simultaneously)
4
SoftwareSerial too slow for MIDI?
0
Extra `eecfbba=.@aa` file in sd card
1
Question regarding using Arduino and MIDI