Issue with adding a library: No such file or directory

I downloaded a Library called "Morse" which I got from the Arduino website:

(all the way at the bottom of the page there is a link called Morse.zip) And basically added the library. Then when I import the library, it is included to the sketch. However when I try verifying it, the following error message appears: 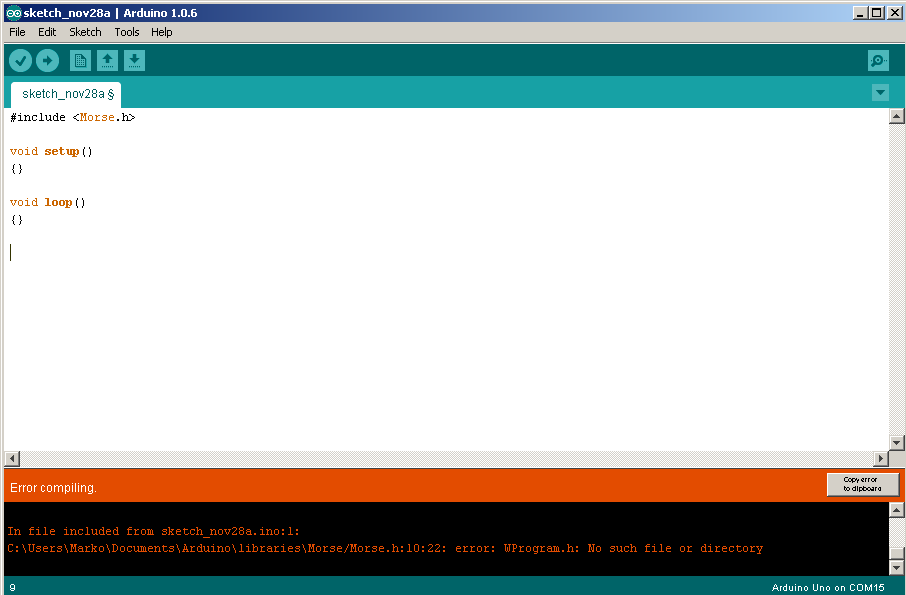 Now I tried reinstalling the Arduino IDE, I tried adding the library again as well as using the manual method that was stated in that first link above, and the error persists.

What I did notice was that in that second line of the error message, something caught my eye: "...\Morse/Morse.h:10:22:..." There is a forward slash!(/) Now it seems weird to me that with would happen, especially given that all the other examples I saw of this error online have a backslash (\). This could be the problem.... but even if it is, how do I fix it? I tried going to preferences... does anyone know?

That library is for the older version of the Arduino ide. To fix this you need to open Morse.h and change WProgram.h to Arduino.h.

Not the answer you're looking for? Browse other questions tagged library ide debugging or ask your own question.

1
Why can't I include a library in another one?
0
Arduino Gesture Sensor error:No such file or directory
1
Trying to make sense of the coding style in Arduino libraries. (Particularly the Radiohead library)
0
Error: function was not declared in this scope when using a library without classes
3
Help solving "collect2.exe: error: ld returned 1 exit status" error in code
1
Adafruit_Arcada' does not name a type;
0
TimedAction.h: No such file or directory