Identifying a counterfeit or authentic Arduino

I would like to know how I can identify a fake or counterfeit Arduino board. For example this product, which is shown below. 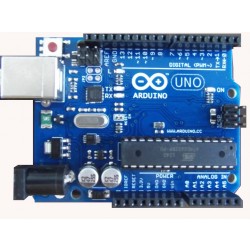 I am concerned that it is cheap (about $12 when converted) and I was wondering if it is like a 'legal cheap version' or is it an unauthentic one? If it is not authentic, would it be legal to purchase it?

It looks like an R3 Uno, but then pictures can be misleading.

The only problem Arduino have with clones is the use of the Arduino name and logo. IIRC they don't mind you claiming "Arduino Compatible", but trying to be an Arduino they don't much like.

If it's just their reference designs re-printed (which you can download for free from the Arduino Uno web page) and no further design work has been done, then although it isn't made in Italy by Arduino, it's still an Arduino.

That's the beauty / curse of open source - anyone can make one.

However, that specific one looks like it fits into the "claiming to be an Arduino" category. It uses Arduino artwork and logos, and tries to make it look like it's an Arduino made by Arduino in Italy, when in fact it isn't. Legally speaking, they are ripping off the Arduino brand. Practically speaking, since it's all open source, the actual device (assuming the components aren't counterfeit) should be perfectly fine.

If they were to change the artwork, so it didn't look quite so much like an Arduino, and had something like "Arduino Uno Compatible" on it, then it would be categorized as a clone, and would be fine - you'd know where you were standing. As it is though, the artwork on it is breaking copyright laws.

The image shown is too low quality to give much information about it, but the two big pointers that it's not made by Arduino are:

No, it's a counterfeit. See here - particularly the 'components' section:
http://arduino.cc/en/Products/Counterfeit

Also, as far as I'm aware, Arduino boards are not produced in China but in Italy.

Not the answer you're looking for? Browse other questions tagged counterfeit or ask your own question.

21
What's the difference between a clone and a counterfeit Arduino?
0
Clone vs Counterfeit (Arduino)