Controlling voltage and current from chip?

I'm well aware that this question perfectly showcases my spectacular ignorance, but oh well. It's a simple enough question, so here we go.

I want to use the chip's outputs to switch transistors (P2N2222A) which will have 60 mA through them (switching common cathode RGB LEDs), so I believe I need to drop it down to around .6 to 1.2V at .6mA, right (I'm not at all sure I'm reading the datasheet right)?

So how exactly do I do that? It seems like I need to put a resistor in between the pin and the base, but don't I need to know the TOTAL resistance of the circuit? Or can I just calculate from the pin itself (I believe that would need 7K)?

Thanks in advance for your help, and please feel free to OVER-explain if you're so inclined. 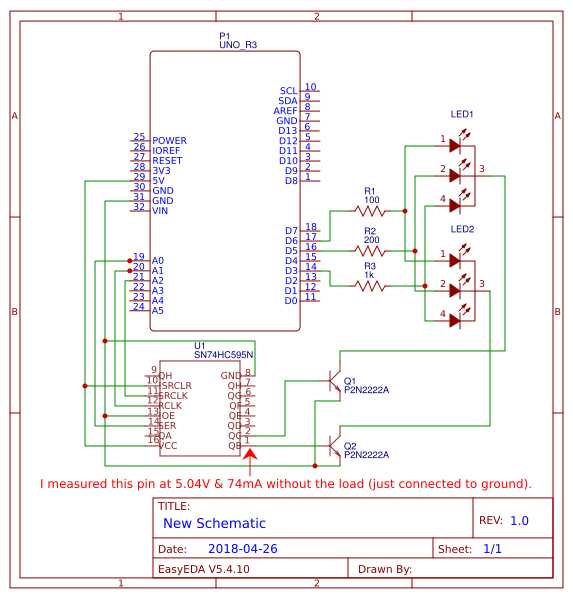 You're misunderstanding what you need to drive a transistor.

A transistor will allow up to a specific amount of current through the collector depending on the current that flows through the base. If less is needed by the load then less will flow.

Think of it like a tap. If there's not much water pressure it doesn't matter how far you turn on the tap, after a certain point the flow of water won't increase any more.

To allow 60mA through the collector you need to provide at least 0.6mA (assuming a hFE of 100) through the base. That 0.6mA will set the upper limit of the current to 60mA. If you provide more than 0.6mA then you will allow a higher upper limit.

The 0.6V on the base is the voltage (difference between base and emitter when wired as "common emitter") at which current will start flowing through the base. It's the same concept as the forward voltage of an LED. For switching the voltage you put on the base must be more than 0.6V to allow current to start flowing. Since 5V is more than 0.6V you don't need to worry about it. If you want precision in your calculations you will want to take that 0.6V into account, though.

What value? Well, it really doesn't matter that much. The lower the value the higher the current, but at these levels the current levels you're dealing with will be minuscule anyway.

It's common to use a 1kΩ resistor in the base for a transistor when using it as a simple switch like you are. That would give you, for each transistor:

For all 8 outputs that's a paltry 35.2mA. Far below the total the chip can provide of 70mA.

If you care about current consumption (you're running from batteries, for instance) you may want to increase to 4.7kΩ resistors to reduce the total drive current down to 7.5mA.

You are making the design more complicated than it needs to be. Use a WS2803 chip, it has 18 outputs, 0-255 PWM level programmable for each output. Got more LEDs? Use more chips. http://da-share.com/files/datasheets/WS2803.pdf

Or use WS2812B RGB LEDs, easy to wire up in a daisychain. SMD typically, and Sparkfun carries 2 thru hole variants also.

Not the answer you're looking for? Browse other questions tagged current voltage or ask your own question.

0
Measure low current with variable voltage
0
How much current and voltage has my resistor + LED
0
Measure total microcontroller current?
1
Voltage and Current and Arduino
0
Combining code for multiple sensors (Current and Voltage Sensors) in one program
2
measure +3V and -3V through resistor divider and switch on/off by digital pins
2
Do the I/O pins on Arduino read current or voltage?
0
LEDs always dim with arduino nano