How do I figure out if my board is approaching end of life?

I have a uno that I have been using for 3 years now. I will be using it again in a rather critical project in which failure on the part of the board could be rather expensive and dangerous. So, I would like to be sure that the board is not approaching end of life or going to fail anytime soon. Is there any reliable way to figure out how long the board will function without failing or reduction in performance?

Unfortunately, there isn't much way to really determine "wear" in the context of solid-state electronics.

Probably the things that are most likely to fail are the electrolytic capacitors and the connectors.

First, if you're using an ATmega CPU for something that could possibly injure someone CONTACT ATMEL AND TALK ABOUT SAFETY PRECAUTIONS. The ATmega CPU used in most of the arduino models is not rated for use in such situations.

Atmel products are not intended, authorized, or warranted for use as components in applications intended to support or sustain life.

Now, realistically, this is probably mostly lawyer repellent, but you should still take appropriate precautions.

Really, while there isn't anything on a common arduino board that really wears out except the connectors, why are you trying to save $30 at a potential huge cost? Just buy a new board.

I'd also strongly reccomend you chose a board with a SMT ATmega328P, since that removes the IC socket contacts from the list of concerns. If possible, also remove the pin-headers, and solder wires to the board directly. Try to minimize connectors, since they are frequent points of failure.

One of the sections of the Arduino that is likely to become unreliable over time is its memory. There are three pools of memory in the microcontroller used on avr-based Arduino boards:

The memory is one part of the board that can be checked and verified, and thus evaluated for reliability/health. A very basic way to check memory would be to write a certain 8-bit pattern (byte character) over every address in the memory and then read the value present from every address. If the value that was written matches the value that is read, then that specific 8 bit block in memory is functioning correctly at the present moment.

Wear in ROM memory usually occurs in a blockwise pattern i.e. n*8-bit blocks become degraded over time. So, for a 2K byte ROM chip, the health of the chip can be estimated by writing and reading from every byte on the chip, and calculating the percentage of correctly functioning blocks. If the percentage of failed blocks is significant (15%-20%), that means that the memory is likely to fail soon.

The test code can be written using separate methods for each of the memory sections.

Any variables declared statically or dynamically are allocated on the SRAM. So, we could declare a large character array (~2000) and fill every element with 255 (all bits 1). Then, we could attempt to read each of those elements and see if the value being read is indeed 255.

The EEPROM can be manipulated using the EEPROM library. The library provides functions to read and write from specific locations in the EEPROM. So, all memory addresses can be tested by simply looping over the entire memory space. This operation will require 500 writes and reads.

Depending on the board usage, EEPROM is most likely to fail first but is not critical to board operation.

Data can be stored on the flash memory using the PROGMEM directive. Similar to SRAM, a large array can be declared and initialized here. Then, values can be read and checked.

Edit : People who down voted my answer, Ohh common don't be too much foolish ! for that you need to be an electron and go through the circuit itself to check everything is ok or not :)

An orange LED near the center of the board (labeled “Pin 13 LED” in the image below) should flash on and off when the board is powered up (boards come from the factory preloaded with software to flash the LED as a simple check that the board is working). 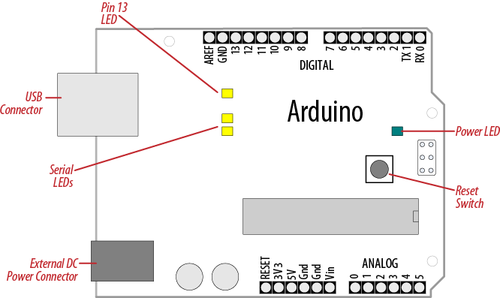 If the power LED does not illuminate when the board is connected to your computer, the board is probably not receiving power.

The flashing LED (connected to digital output pin 13) is being controlled by code running on the board (new boards are preloaded with the Blink example sketch). If the pin 13 LED is flashing, the sketch is running correctly, which means the chip on the board is working. If the green power LED is on but the pin 13 LED is not flashing, it could be that the factory code is not on the chip. If you are not using a standard board, it may not have a built-in LED on pin 13, so check the documentation for details of your board.

Online guides for getting started with Arduino are available at for Windows, for Mac OS X, and for Linux.

Not the answer you're looking for? Browse other questions tagged arduino-uno safety reliability or ask your own question.

1
How to program thresholds?
0
Can't figure out how to send Motor Values over Bluetooth, Arduino Bluetooth-controller robot
2
Arduino and WS2812 RGB LED Strip “freezing”
2
How do you figure out an efficient battery setup for a project?
7
How to increase life of EEPROM?
0
MCP23S17 library crashes
0
nRF24L01 - leaves out end characters during transmission
1
cant figure out how to fix this compile error