I am building my own arduino.Here is my code Below. I found code working for Digital Ios like blink example ; analog reading, Problem i am facing in Serial Monitor.Whenever i open Serial monitor i get trash values.I have choose proper crystal & proper values. Please let me know possibility for getting trash values 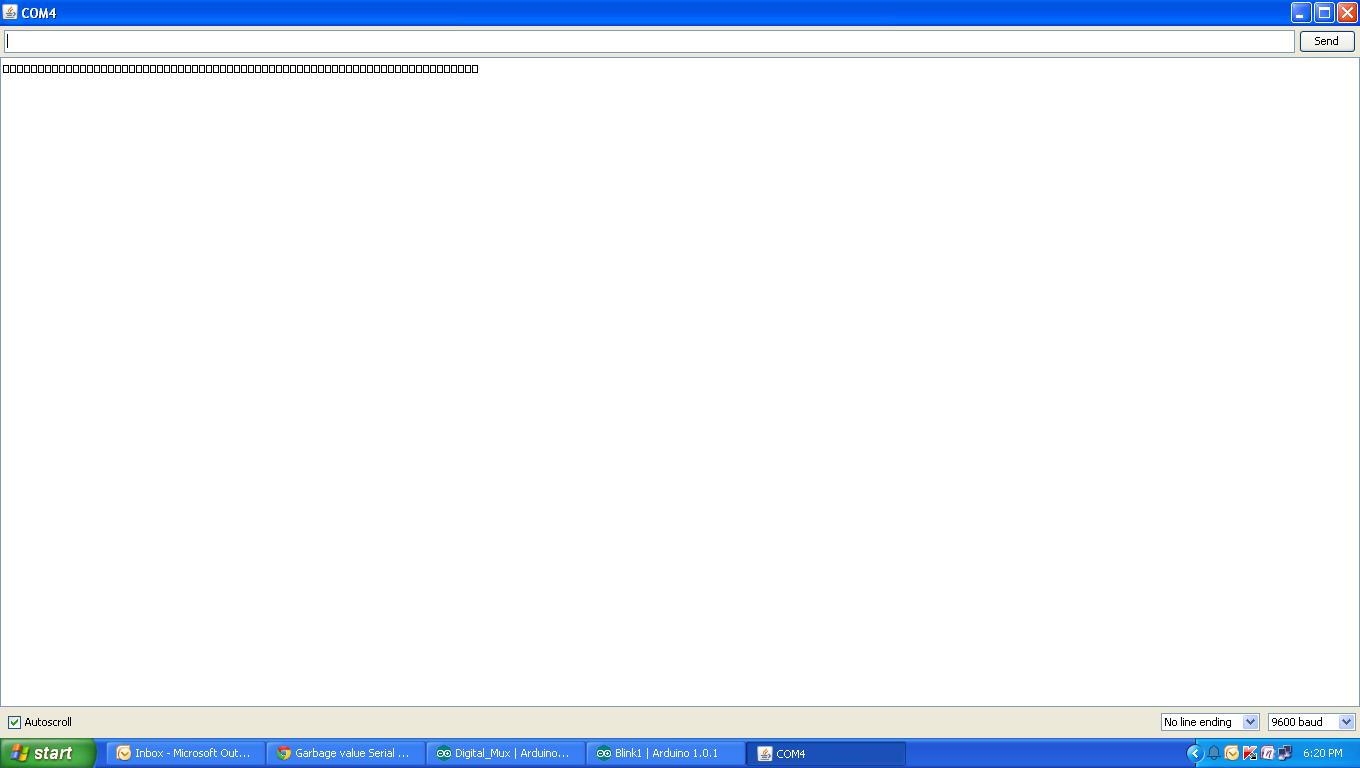 One of my projects does this too. I leave it connected to a USB port for power so it can control a room fan. Every 4 seconds it writes a line of data to the serial output. When I open a serial terminal on the computer, I immediately see a short stream of garbage, followed by the next, and all subsequent log outputs, properly displayed. It looks as if the serial-to-USB chip has some data buffered in it which it delivers, but out of sync, as soon as the terminal connection is made, but this is just a guess.

Have you tried resetting your chip while the terminal is connected? When I do this, there are no sync issues and the displayed data is all valid.

Update: If you only ever get garbage from your terminal, then it's likely the terminal and the Arduino aren't matched for one or both of baud-rate or frame-size.

Arduino serial hardware uses an 8N1 frame: 8 data bits, No parity bit, 1 stop bit. Your serial monitor must be set to match this (and it probably is, since this is the most common convention, but worth checking.

Second, the baud rates must match. You've set the Arduino for 9600 baud and your serial monitor program must be also (from your screenshot, it looks like it is).

You said you are using a crystal so it quite unlikely that Arduino's 9600 baud is inaccurate, but this could happen if you were using its internal clock source.

Finally, in the lower left corner of your serial monitor screen shot, it looks like you have selected "No line endings". Serial.println() ends every line with CR/LF. See if that is an available line-ending setting. It is sometimes named "OD OA" (the hex values for Carriage-Return and Line-Feed). Try that setting if it is available.

The serial protocol is one of the oldest communication protocols but it has many variations. (Did someone say "standard"? :-) Everyone gets bitten by it, eventually.

Opening a Serial connection will reset your arduino and restart the whole program. I learned this the hard way when coding a windows serial com-monitor for triggering systemcalls from arduino

Not the answer you're looking for? Browse other questions tagged arduino-uno serial programming bootloader or ask your own question.

0
Arduino voltage drop while communicating with another Arduino
0
Stepper Motor Button Press
2
What are the logical errors in this piece of code?
0
Arduino code to control 4 led's from 4 buttons
0
prgramming arduino led on then off
0
Help with clearing memory