Interrupt fires a random number of multiple times for one pulse

Overview: I am sending pulses to my Arduino, but sometimes one single pulse is interpreted as anywhere from 2 to 30 pulses. But after looking at the pulse on an oscilloscope (see Fig. 1) I am not sure why. When I use a really long wire the ratio of false pulses to legit pulses is about 1 to 1. I shortened the length of the wire and improved the situation, so that only 1 in about every 2,000 pulses is registered as a false pulse.

For one test, I added a capacitor to the short wire situation, but that increased the rise time and made the problem worse. I am currently using attachinterrupt and have tested the situation with using both a rising and falling edge. Right now, I mainly want to understand how interrupts work on the Arduino in light of my current problem, although I welcome general advice.

I have the relevant code attached below. I have much more code as well, but it deals with saving pulseCounts to the SD Card and uploading electricity consumption files through the cell network. 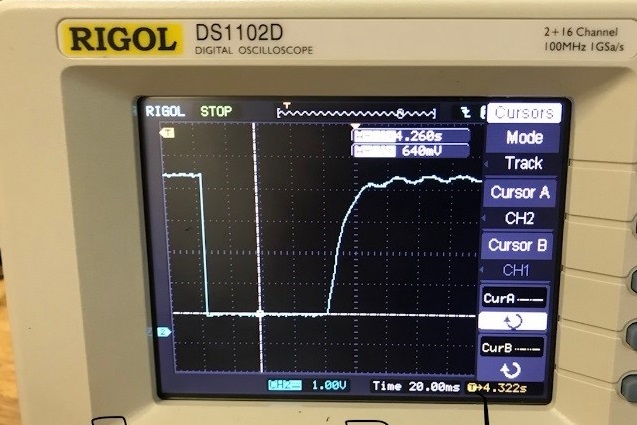 Firstly, unless the processor pin is a Schmitt trigger, increasing capacitance will only make the problem worse by allowing any noise to be interpreted as multiple high-low transitions. For a CMOS logic input the area around the transition point of 1/2 VDD typical is actually an area of linear operation, not digital.

A Schmitt trigger introduces hysteresis such that when the signal is interpreted as a high level, it must go low by more than the hysteresis to be interpreted as a low level again. This is accomplished with a bit of positive feedback added to a buffer where the output transition from low to high then pulls the input that much higher or a transition from high to low pulls the input that much lower: 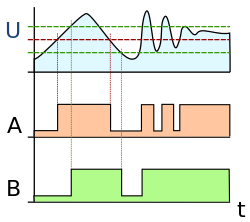 The red line represents the typical CMOS threshold and the green lines represent the thresholds defined by the hysteresis of the Schmitt trigger. The hysteresis defines the noise immunity of the input. Most processors have pins that are equipped with a Schmitt trigger or and external device like a 74HC14 can be used.

Another way to deal with this type of noise is to lock out any transitions within the expected pulse-to-pulse transitions: Once triggered, no more transitions are allowed until the lock out time expires.

1
Arduino Mega read of serial encoder read at 1,024,000 baudrate?
3
Interrupt fires multiple times
1
ISR not working as it is supposed to
3
Two outputs: which one "leads" the other?
2
Interruption triggered twice when set to FALLING
0
Soft debouncing from an interrupt during stand-by
2
Why impedance between I/O pin and ground drops when Arduino is not powered