On my breadboard I have a dedicated power line and ground line on each side, is it okay to share the ground between both batteries and consequently share grounds for any servo motors or sensors i connect?

Not only can you share the grounds - sharing the grounds is required for there to be any form of meaningful circuit for signals to get around the place.

To copy-and-paste a blog post I wrote some time back:

A lot of the time on the Arduino forums we get questions regarding wiring things together. One common format is:

I want to connect my 12V powered LED strip to my Arduino but I can’t get it to communicate. I have checked all the connections and they seem fine. I have a 12V power supply for the LEDs and the Arduino is powered from the computer.

And 9 times out of 10 the first question we have to ask in return is:

Have you connected the grounds together?

And guess what the reply to that usually is? Yep:

No, do I need to? And isn’t that dangerous, connecting a 12V ground to the 5V Arduino ground?

That in itself shows a fundamental lack of knowledge about what “ground” actually is. So let’s start by clearing that up:

Ground, technically, is just a name given to a point in your circuit. That point is a point chosen by you against which all other voltages in the circuit are measured. Often it is the point of lowest potential, such as the – side of a battery, or the – connection of a power supply. Or it may have been chosen for you, such as the ground signal from the USB connection to your computer.

So ground has to be a single point in your circuit against which all voltages “make sense”.

Let’s take a look at the typical circuit from the original question. An Arduino connected to some 12V device (such as some 12V LEDs):

Here you can see the Arduino connected to, for example, a 5V USB charger. It could be a battery, or it could be the USB port on your computer. It matters not. Connected to that is a 12V device which then has its own 12V power supply. Now. Where is ground in that circuit?

That doesn’t sound too bad, does it? Each device’s power is correct with respect to the power supply it is running off. As far as that goes, sure. However take a look at the data signal going from the Arduino to the 12V device. What voltage is that at?

Well, seen from the Arduino’s point of view, with respect to it’s ground, since it is generating the signal, it is a 5V signal. But, what about what the 12V device sees? What voltage is that signal with respect to the 12V circuit ground?

Given that voltages aren’t absolute – they are only relative to a reference point within the same circuit, it is impossible to know what the voltage is there.

There’s something more fundamental at play here though which can help you to understand it even better. In the image above there are two red arrows in loops. That is the flow of the current around the circuit (shown as conventional current flow). The key phrase there is around the circuit. Current has to flow out of a supply, through a circuit, and back to the supply from where it came.

So you connect the grounds. As soon as you do that a lot of things start to happen. Let’s do that now and see how the circuit looks:

In actuality the loop is a branch from the 5V power loop. Current goes from 5V into the Arduino where it splits, some to run the Arduino and some out of the IO pin. From there it goes through the 12V device, down to ground, then joins the current flowing out of the ground of the Arduino to go back to the 5V supply. It’s useful to think in terms of discrete loops though so you can get a better idea of how the ground fits into things.

But isn’t it dangerous?

Absolutely not. Not only is it not dangerous, it’s safer than not connecting grounds together. Since now the whole circuit has a single baseline voltage to reference everything from 12V is 12V and 5V is 5V. Without that link the voltage difference between ground on the 5V side and 12V on the 12V side could potentially be many hundreds of volts (especially when the distances between the two points is great). For fully isolated systems, such as battery powered devices, that is not a problem. For anything using power supplies though it can be quite dangerous. And that leads me on to my next point – a slight variation on the question:

I built a circuit with a 12V device powered from a power supply which is controlled by my Arduino. It all works well. But as soon as I run the Arduino from a battery instead of my computer it stops working. 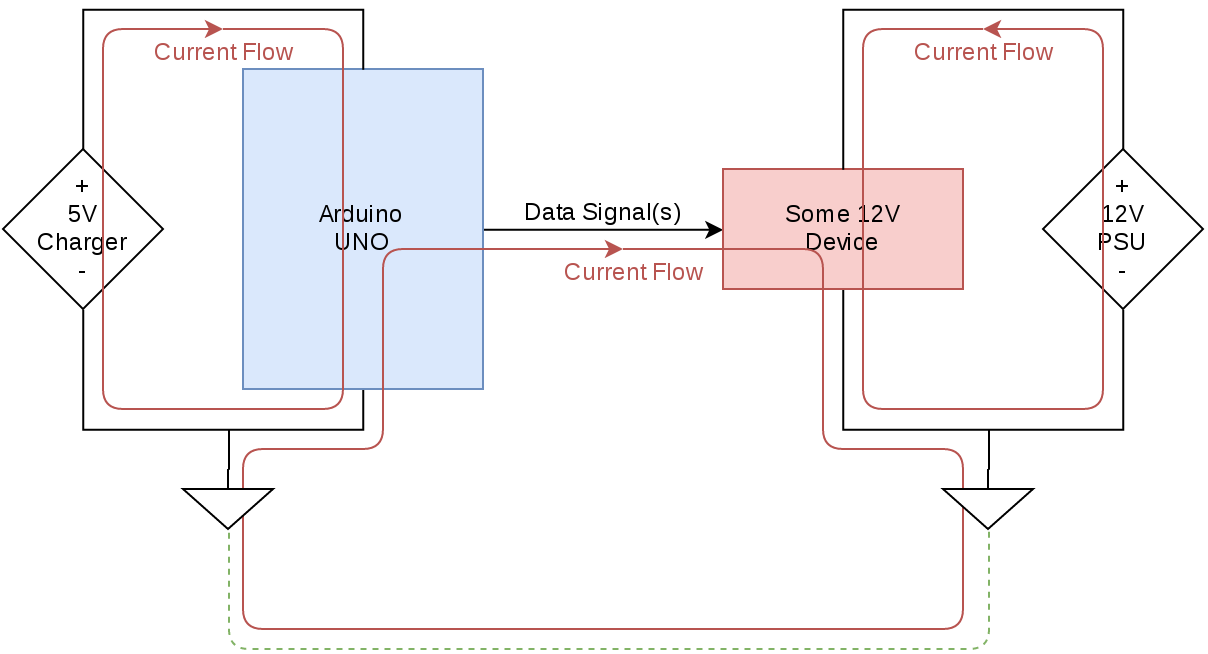 As you can see the current loop still exists, it just takes a longer route. As soon as you remove the Arduino from your computer and power it from batteries – or a power supply that has no connection to earth – the lower part of that loop disappears completely and you are back to the original circuit with only 2 loops. And it stops working.

Connect the grounds together manually, though, and you reinstate that portion of the loop, making it all work again.

So there you have it. If you have multiple power supplies in your project, whatever they may be (except in special circumstances) you must connect the grounds together for it to work. If it works without connecting the grounds together then you are inadvertently relying on some pre-existing ground connections to do the job for you, and that is likely to fail if your setup ever changes.

Not the answer you're looking for? Browse other questions tagged arduino-nano motor voltage-level battery h-bridge or ask your own question.

1
Why does the battery eliminator connected to the wall provide a better spin to my dc motors than my battery of the same voltage?
0
estimating battery run time
1
Two motors in one set of pins/plugs
1
Share battery pack with Arduino and DC motors
0
Issues on Arduino, LiPO battery and two mottors setup
0
Safe to control multiple power sources through a switch through the ground?
0
Powering 3 servo motors and Arduino Uno with one 9 V battery
0
Can two electronic speed controllers be connected to the same ground pin?