Attiny85 appears to be drawing 0.2mA current but battery running down more quickly

I am trying to get a temperature sensor (tmp36) working with an Attiny and if possible I would like it to run for several weeks. I have tried to power down the Attiny and it appears to be drawing only 0.2mA current when asleep, and around 4mA when awake (using a multimeter). However the CR2032 battery went from 3.24V to 2.9V in about 1.5 days. If it was really only using 0.2mA I would have thought it would go down much more slowly than this.

My circuit is an Attiny85 connected directly to a tmp36 temperature sensor. I have a capacitor connected across the GND and Vcc of the tmp36. Since I am using a surface mount tmp36 I also have the shutdown pin on the tmp36 pulled high (connected directly to Vcc). Otherwise there are no other connections, it's a very simple circuit and since the current normally appears to be 0.2mA I'm not sure why the battery voltage reading is going down so fast.

I am new to turning off the attiny(and still pretty new to arduino programming) and I copied most of the code for putting the arduino to sleep from here: https://folk.uio.no/jeanra/Microelectronics/ArduinoWatchdog.html (and possibly other places).

The code I have is as follows:

Please excuse my coding I'm still learning. I deleted my comments at the start of the program which explain why I'm changing the temp. to char etc. as they weren't really relevant to this question but if anyone wants them let me know.

Here is the circuit, a 3V battery is connected between Vcc and GND. The capacitor is 0.1uF ceramic. I am using the SOIC (surfacemount) type package of the tmp36, the (not) shutdown pin in the SOIC version needs to be pulled high so I have connected it to Vcc as specified in the datasheet (this pin doesn't exist in the TO92 through-hole version of the tmp36). 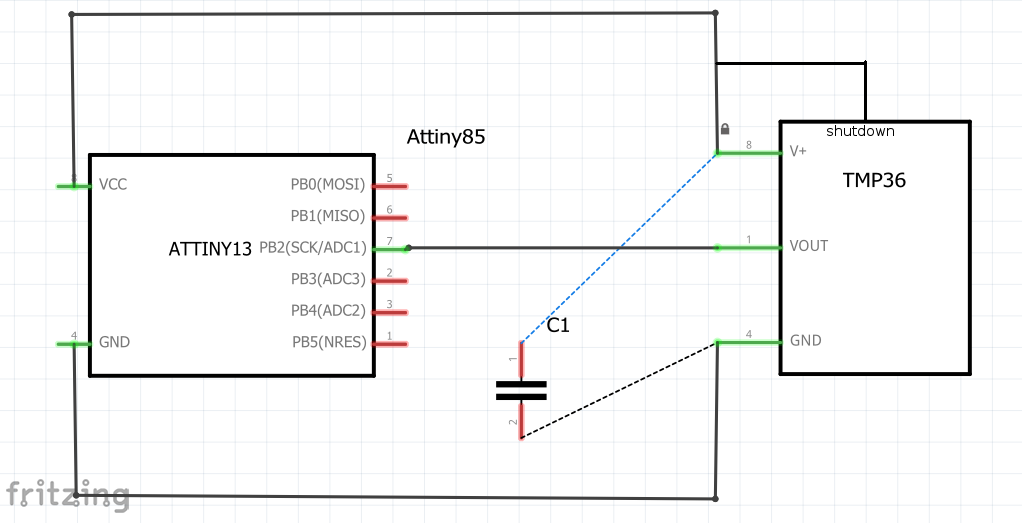 All help is greatly appreciated,

I'm also interested in suggestions for reducing the current further. (Or for how to store more temperatures in a 512 byte EEPROM but that's less important than the battery)

p.s. I have tested this code and it did save one temperature per hour as expected. (The section of code that saves temperature differences rather than temperature doesn't run when there is a 60 min gap between temperatures so all temperatures were saved to the eeprom as integers). 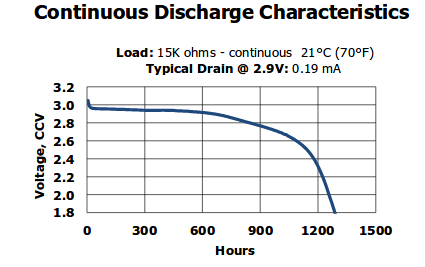 It looks like slightly more than 2.9V would be the expected voltage for up to 600 hours.

3.2V looks like it is fully charged, and won't stay at that level for long.

Having said that, 200 µA current sounds like a lot. You should be able to get it down to 6 µA. Perhaps post your schematic?

After a bit of experimenting I got the current draw down to the (expected) lower level of 4.25µA running at 3V, and 6.77µA running at 5V.

You had not in fact turned the ADC off. You need to change:

I can't comment on what extra draw, if any, your TMP36 will cause, however this should help get the overall current down.

Of course, you need to put the ADC back on afterwards, so this might be better:

THIS IS NOT AN ANSWER; it's just a very long comment and I was not able to add all the formatting and ideas in the comment I was writing. Please don't consider it as a valid answer.

I leave all the low current topics to Nick, since he's doing a great work as usual. I wanted just to give you some ideas for the temperature acquisition and storing.

First of all, the floats. Forget them. floats are one of the worst things you can do to your poor microcontroller, unless you have an onboard FPU.

I haven't checked your sensor, so I assume that the calculations you performed were correct. (Note: voltages above 1.1V should not damage the board, but will not be detected - the value will cap at 1023)

You are using floats to do this. I don't like them at all, so let's switch to ints. Moreover you decided to store them with a 0.1°C precision, so that /10 is meaningless. So in the end

EDIT: As Edgar Bonet pointed out in the comments, the problem of having a 4 bytes is not solved with this trick, but dividing by 1024 is more "time consuming" than dividing by 256 (because the 10-bit shift involves shifting bits through bytes, while a 8-bit shift is just moving the bytes. His tests (avr-gcc 4.9.2, optimization for size -Os) show that a shift by 10 bits (=division by 10) is converted in a routine to shift one bit through all the four bytes and then this is repeated 10 times. This lead to 72 clock cycles. A 8-bit shift, on the other hand, was converted to a byte movement for three out of four bytes and the zeroing of the uppermost. So 4 clock cycles. So... Yes, this does not solve the problem, but can optimize the code; I'll think of this trick in my future projects. Of course this can be done in a much more optimized way, and the number of cycles required can change according to the way the operation is written and the optimization level, but it is worth remembering that if you shift by a multiple of 8 bits (on an 8-bit machine) it is more optimized than another arbitrary value.

In any case, even with either of the two values, a 4-bytes int is required. In order to reduce unnecessary overhead, let's switch it back to a 2-bytes whenever possible. Something like

So the operation order is

Now, the storage. If you store the values as they are, you will get 256 measurements, which at one measurement per hour mean something like 10 days.

One easy way to increase this space is noticing that you are using only 11 bytes out of 16. So you can compact it and get 372 measurements (around 15 days)

The trick you used (ten measurements with just the difference) is ok only if you guarantee that in ten hours the value will not drift by more than +/- 12°C. This is not guaranteed and probably also not optimal. I'd prefer another approach, which is based on the fact that you are using only 11 bytes out of 16. You can have two different data stored in the EEPROM, which are differences (1 byte) or whole temperatures (2 bytes). You will distinguish them with the first bits: a 0 denotes a difference, a 1 a whole temperature (followed by 0 is the low byte, by a 1 is a high byte). This means that for the difference you have seven bits, so it can range from +63 to -64. Whenever you reach a difference from the previous temperature within 6 degrees you don't save anymore the whole temperature. The code to do this is for instance the following one:

In this case, provided that the temperature does not vary a lot, you will get 511 measurements, which is like 21 days. For each variation greater than 6°C/h you will lose one hour of measurement, down to 256 measurements. Please note that I wrote EEPROM.update instead of write, even if this is not necessary (just one of the things I do every time).

The last possibility is to switch to a 0.5°C resolution. If you use this resolution, you can map your values on a range 120/-100, thus being able to use only one byte for each measurement. Since the accuracy is +/- 2°C, you can also choose this without problems.

Apart from the storage, if you record only 256 bytes of information how do you know which are the correct values and which are the previous ones? My suggestion is to reserve one value (for instance if you have used my code you can get an impossible value such as 0x40 - which if I'm not wrong maps to DIFFERENCE -64, which is impossible since the difference is stored only when greater than -63) and fill the memory before starting to insert the values. beware that if you do it then turning on the board will reset the memory...

One last suggestion: you have a sensor which stores the data internally, but.. How do you get them out of it? My personal suggestion is to have a dedicated pin (for instance PB3) tied to a jumper. If it is open then you will proceed with the normal program, otherwise you wait for a download request. (don't do the opposite since the jumper inserted drains the battery). Consequently the code can be something like this:

I hope that the software serial works even without the main structure (so in a while(1) in the setup).

Please keep in mind that all the code written here has NOT been tested, so it may require some corrections

Not the answer you're looking for? Browse other questions tagged power attiny current sleep attiny85 or ask your own question.

0
Not sure why eeprom isn't reading back correctly
0
Is it common that Uno clones misbehave when connected to 12v on VIN?
1
DHT11 Sensor : Stand-by or Shut down?
0
noisy output lines when waking up from a sleep
1
Use ATTiny as a battery-backed RAM?
0
Problems / doubts on battery-powered Arduino Nano WiFi weather station I built
0
ESP32 - NTP inaccuracy after deep sleep
0
Managing configurations via EEPROM by writing it with the hex file
0
Arduino to AtTiny change of pin interrupt behaviour?