Summary: I'm having trouble with writing a program to get RAM data from an SH1106 OLED controller via i2c. In the first part of the question I've written the assumptions I've made to get informations I couldn't find in the datasheet, in the second part I've posted a program which should read that data but doesn't (obviously, since I'm writing here...).

I'm working on a program to control an SH1106 OLED display. I read the datasheet to find out how to send commands to it and it works, I can write to my display.
Now in the datasheet there is one thing I don't understand: how can I read the RAM?

Consider the picture below, taken from the command table at pages 30 and 31 of the SH1106 datasheet; the last line is the one about reading RAM.
This chip can be connected to a microcontroller through different interfaces: 6800 and 8800 8-bit parallel, 3 and 4 wire SPI and i2c. Since I'm using SPI I don't have any A0, RD or WR pin, and I didn't found anywhere in the datasheet a "translation" of the boolean value given to those signals in the command table to some i2c signal. I assume that WR corresponds with the lsb of the i2c address, since it is 0 for writing and 1 for reading. And my assumption seems to be true since I can read the status (line 25).
Then I assumed that A0 should match DC (Data/Command, see second screenshot), a bit of the Control byte. The control byte is a byte that has to be sent before each byte or group of bytes to tell the chip how to interpret it (command or data). But I tried to send it before an i2c reading with different values and I always get the status byte (never the RAM data).

How could I read the memory of an SH1106 chip through i2c? The datasheet doesn't states that it is impossible (neither that it is possible...), maybe I simply can't? 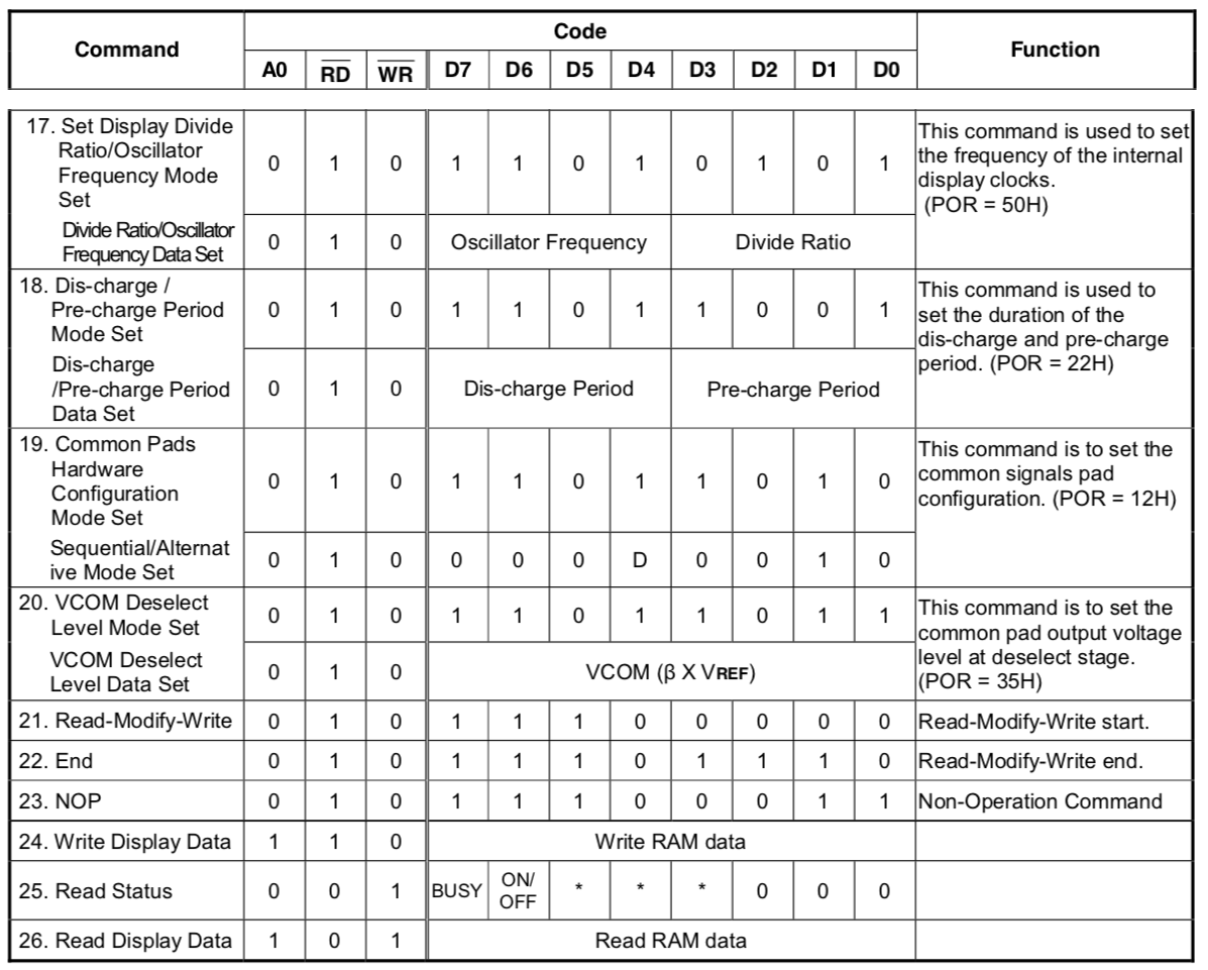 Here is the shortest working program I could write which shows the problem (i.e. which contains my implementation errors). I tested it on an Arduino UNO.

I've tried as many possibilities as I could imagine in the // Request RAM data section. To avoid confusion I leave only the posted one to your kind analysis, but of course if someone would like to see them just write it in a comment and I'll post all the (unsuccessful) test I have made.

The output on the serial monitor is always a list of 0x3s.

I've not reduced the initialisation routine I use in my code because maybe the issue comes from there. BTW, I have no idea about what the i2c_send(0x8D); //................ * line does, I've added it because all the others SH1106 libraries I found had it, but I didn't found it in my datasheet. Maybe there are multiple versions of the chip or of the datasheet?

My version of the data sheet has a flowchart (Figure 10) for doing a "read-modify-write". In there is a clue - there has to be a dummy read before the actual read is done. Here is my function for plotting a pixel, which requires a read-modify-write to add a pixel to the existing data. It's not clear dummy read is needed before every byte read, or just on the first of a sequence of bytes, but that's easy enough to test.

This is woefully inefficient for plotting one pixel, but it's a start.

Edit: I've subsequently confirmed that only 1 byte of dummy read is needed, even if the reads are stopped/restarted. As long as you're only doing RAM reads, no further dummy reads are needed.

It's slightly tricky understanding the protocol with I2C. The bit to watch is:

If the R/ W bit is set to one in the slave-address, the chip will output data immediately after the slave-address according to the D/C bit, which was sent during the last write access. If no acknowledge is generated by the master after a byte, the driver stops transferring data to the master.

So you have to set the D/C bit in the transaction before you want to access the RAM.

It's unclear from the datasheet if you have to send a data byte after the control byte for it to be accepted, but if you do you can use the NOP command.

So you do a write of NOP with D/C (which, yes, corresponds to A0 in the other interfaces) set to 1 in the control byte (i.e., write the bytes 0x40 0xE3) and then you can do a read which should return the RAM contents at the current page/column address, which will auto-increment for each subsequent byte.

It's quite an unclear datasheet when it comes to explaining how I2C reading works...

Not the answer you're looking for? Browse other questions tagged arduino-uno i2c display or ask your own question.

1
16 bit register addressing through i2c
0
I2C begginer with I/O expander with mega328p C code
0
Confusion receiving I2C data from magnetic sensor
1
How do i fill the second byte?
1
How to manage variable I2C read lengths requiring address incrementation (Wire/I2C/EEPROM IC emulation)
1
Communication between arduino nano and MCP3424 over I2c
0
OLED (I2C) and Micro SD card module not working together in Arduino
1
Reading I2C registers as slave device
1
How do I read from a correct data address of LIDAR using Arduino in I2C?