I am trying to create an electric meter reading setup for Arduino, and I have been searching for it and almost every posts available is using LDR sensor.

And since it is using LDR, the system should be kept in a dark area, or that the LDR is taped to the flashing LED so that no other light source will interfere the sensor.

But I wanted to have a different setup, and what I am thinking is:

Is this a possible setup? Will it not fry the Arduino or the LLC? Will Arduino be able to detect the pulse?

If not, are there any other options? can I use discrete components instead? (I will be the one creating the circuit connection for the LED and Arduino, using resistor, diodes, etc.)

When you aren't using the same power supply as the product you are interfacing with, it's usually a good idea of have some form of electrical isolation, which is what the LDR+LED was doing -- there was no way for a voltage spike to reach the Arduino, nor was there any way that different "ground" potentials could cause problems. (Imagine if the ground reference for the meter was floating at a high voltage with respect to earth-ground, but your Arduino power supply's negative line was referenced to earth ground.)

A good way to get electrical isolation is with an opto-coupler, also called an opto-isolator, which is essentially an LED and a photo-transistor inside the same package. The LED side is completely electrically isolated from the photo-transistor side, but light can pass from the LED to the phototransistor.

You would connect the opto-coupler so that current passes through the LED side when the pulse happens, and with a pull-up or pull-down resistor on the phototransistor side, which gets pulled down or up (depending on the circuit) when the LED is on. 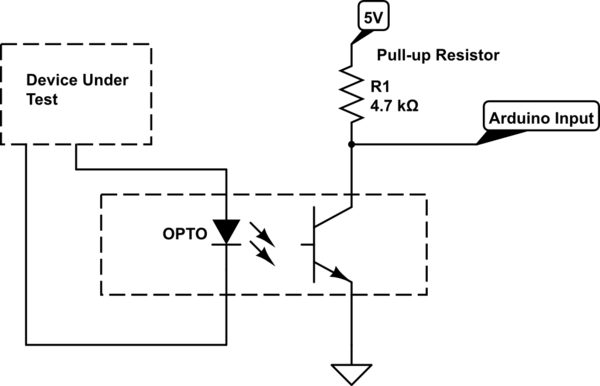 Not the answer you're looking for? Browse other questions tagged arduino-uno led voltage-level electricity voltage-protection or ask your own question.