I would like to exchange data via Xbee. I've set up a communication based on strings between the Arduino and a Matlab software. Unfortunately this kind of communication isn't enough robust and sometimes messages aren't delivered correctly. So I decided to move to the binary communication.

I'm not able to send binary data from the Arduino to the computer.

Let's say we want to send the decimal value 17 which is 0x11 in hex if we receive 16 from Matlab.

In the third attempt I tried sending an array of bytes and noticed that the received values were different.

The Matlab software sends data correctly. I used the fwrite function as follows fwrite(xbee,hex2dec('10')); and the fread function to receive the ack which:

reads binary data from the device connected to the serial port object, obj, and returns the data

I've also tried using XC-TU to monitor traffic on Serial port (blu values are sent from the PC, red ones are received from the Arduino) and as you can see red values are different and none of them is equivalent to 17! What am I missing? 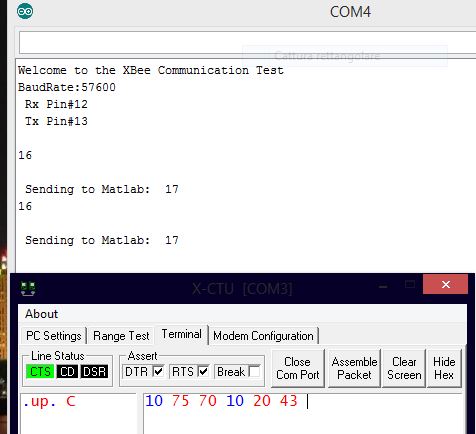 2
XBee, external libraries and passing structures as arguments
5
Binary serial transmission order of data
1
Sending data via SoftwareSerial results in garbled reception
1
Receiving a packet via XBee radio
1
Problem with transmitting 2 byte data in correct way
0
Serial data not parsed correctly
0
What could cause data to be printed correctly, then incorrectly and then repeated? CAN bus / general transmission