Wake up ESP8266 with multiple GPIOs

I am building a ESP-07 based IOT device, that detects the status of 4 doors. The device must connect to WiFi and send an http request, when 1 of 4 doors is opened. I want to place a reed switch, for example on each door. The battery consumption should be minimal, so I thought of using deepsleep () or something similar to keep the device asleep most of the time, or keep it completely off (like most Dash buttons does).

I have studied several options, but almost all use a single GPIO to wake up the device. For example, this option wakes the device up if D3 goes high, and sleep if D3 is low. #include #include #define WAKE_PIN D3

Here, GPIO_ID_PIN(2) corresponds to GPIO2 on ESP8266-01 , GPIO_PIN_INTR_LOLEVEL for a logic low, can also do other interrupts.

Can I use more than one GPIO, that is, one of 4 GPIOs to wake up the device?

I have the problem of knowing which of the four doors has been opened!

The other option I have thought is to use a latch circuit that turns on the (previously turned off) device using a single GPIO. Something like this: 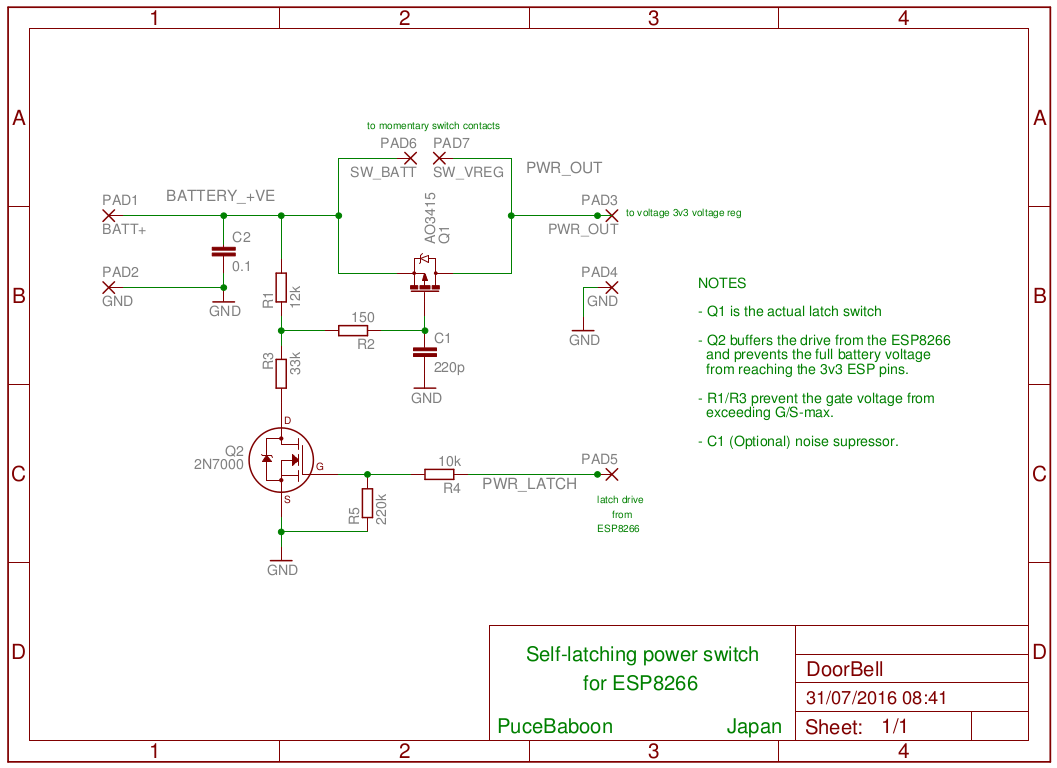 What I meant is that ESP-07 can latch its own power on (and off) using an MOSFET pair connected in parallel with the physical (momentary contact) power switch. When the power switch is pressed (or a door is opened), one of the first things the ESP8266 needs to do is latch the power on. When the current iteration of this programm is done, it simply turns it's own power off again.

What I want to know is how I can use more than one signal from each of the 4 doors, or, use 4 GPIOs to activate the latch circuit. I tried with one single door connected to the GPIO that wakes the chip up. I want to extend the functionality of my program so that any of the 4 doors turns the chip on.

P.S.
I have opened a thread about this topic in Arduino Forum as well.

Browse other questions tagged esp8266 or ask your own question.

1
Is there a way to power off external devices during deep sleep
0
Low-power detect rise and fall of input signal
1
Switch controlled power saving esp8266
0
Use ESP8266 GPIOs after Flash Startup
1
Wake Huzzah Feather ESP8266 With Reed Switch
0
Wake up ESP8266 from deepSleep with a button
0
ESP8266 Deep Sleep Wake Up
1
NodeMcu 1.0 resets automatically after sometime