I have both an Arduino Uno and an Arduino Nano but I can't decide which one to use for my project. My aim is to maximize battery lifetime. I have also implemented an 8-second watchdog timer to periodically sleep and wake up the ATMega328P.

I would like to know which one will be more power-efficient.

A Uno which isn't doing anything useful except being turned on will use about 50 mA of current from the power jack at 9V.

If you use 3 x alkaline AA batteries (giving a nominal voltage of 4.5V) directly into the 5V pin of the Arduino then you might get 2500 mAh which would be 50 hours at 50 mA per hour.

You can save a considerable amount of power by using sleep modes as I describe on my page about power. It also helps to use a bare processor (no voltage regulator, no LEDs).

I made a temperature and humidity sensor which runs from 3 x AA batteries. Using sleep mode, plus various other techniques, that is running for over a year without needing new batteries.

I would like to know which one will be power efficient?

Both the Uno and the Nano use the same Atmega328P processor. Thus the technical considerations would be the same. Both have a voltage regulator and a "power on" LED which alone would use a lot of current, compared to everything else.

It's not that hard to make a minimal board. I have a page about doing that. Example of all you need: 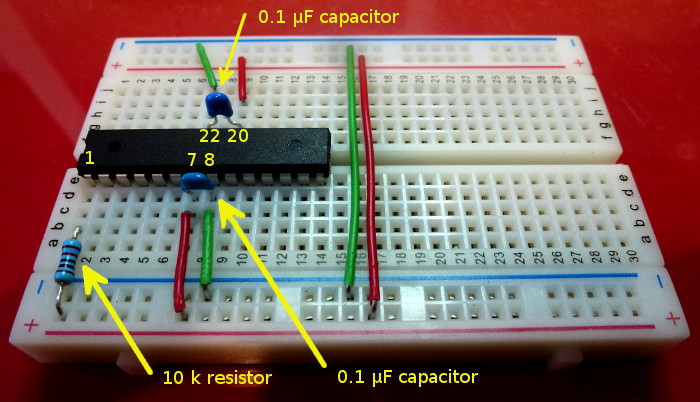 If you use a deep sleep mode, combined with using the watchdog timer to wake every 8 seconds (and check the time, say every 10 times it wakes) you can reduce power consumption right down.

My temperature sensor uses an average of 42 µA which is a lot less than 50 mA. (A thousand times less). Thus your 50 hours run time becomes 50,000 hours which is 2083 days. Your batteries will probably self-discharge sooner. :)

Don't use either use something with no USB, regulator - e.g. Pro Mini (run from 3.3V)

Just running the Arduino (or indeed most digital circuitry) from a lower voltage will already reduce power consumption - admittedly at a slight cost in processor speed. The Atmega328P will run at 12MHz on 3.3V, although the Pro Mini uses the more conservative 8MHz.

Not the answer you're looking for? Browse other questions tagged power arduino-nano or ask your own question.