Update: This piece of code does not do the same as the one in the right answer, it also reacts when one lets go of the button.

I printed out j and it seems like, instead of counting up +1 everytime the button is pressed once, it turns +1 and then +1 again which makes two LEDs at a time turn on. But I don't see where the behavior of j comes from...

[Update: There was a mistake in the code which caused the random behavior, but now, nothing happens when I push the button.]

[I wrote a sketch which is supposed to make the Arduino turn one of five LEDs on one after another every time I press the switch.

But instead of turning one LED on after another, directly after upload it just makes them turn on and of at random. I don't push the button. Serial.println as well just spits out one character, similiar looking to a d.]

Can anyone point out my mistake to me?

This is the circuit 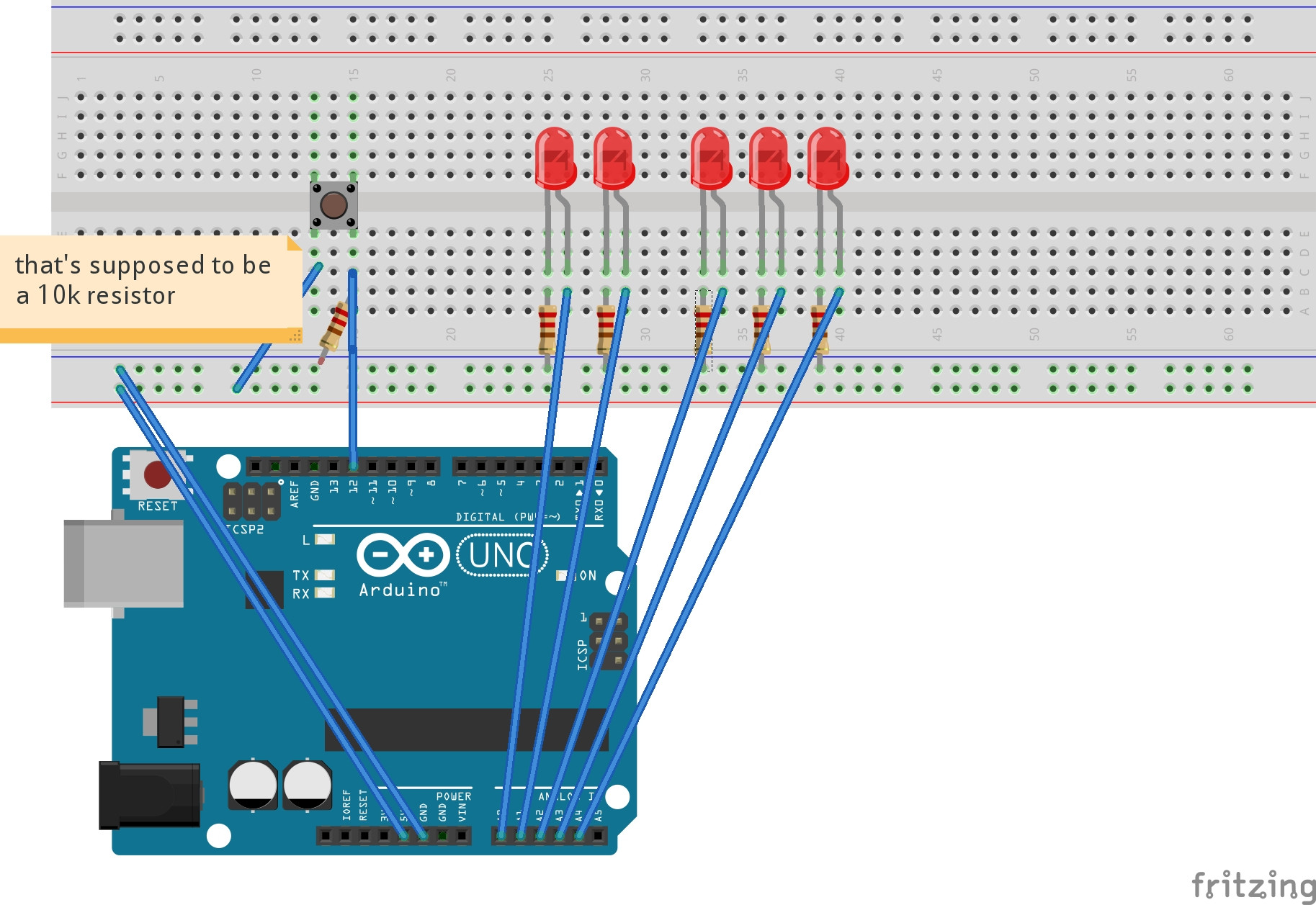 and this is the old code of the sketch

I think you're looking for the action (in pseudo-code):

But you have an IF(button) in a Loop{}. Something like:

So when you press the button j will increment every iteration of Loop {} (very fast) and you won't be able to see the LEDs changing. Your 'button = LOW' is not effective because 'button' gets set again the next time if the button is still pressed.

Try printing j instead of button at the line:

and that should highlight the problem.

I would implement a ONCE(Button Pressed) function by observing the previous button state and checking it has changed from LOW to HIGH.

Switches are mechanical so they don't switch cleanly. This is called contact bounce and means the switch switches on/off very rapidly for about 10ms or so after the contact has been pressed or released.

You can deal with it quite simply in the code as follows (pseudo code) just by waiting for the bounce to dissapear and checking the button is still pressed:

Your code has a serious bug here:

You increment j without any boundary so it will have the following cycling values:

% is the modulo integral operation that will give you the reminder of dividing j by 5, which is always strictly less than 5, and it cycles as you want.

And see the Debounce example sketch to learn how to debounce inputs.

Not the answer you're looking for? Browse other questions tagged led sketch button debounce or ask your own question.