ESP8266 cannot connect to an existing network after using AT command

I followed this tutorial to connect the ESP8266 to a wifi network using AT commands. I used the below schematics (without the connection between ESP's CPIO 0 and Arduino's Ground): 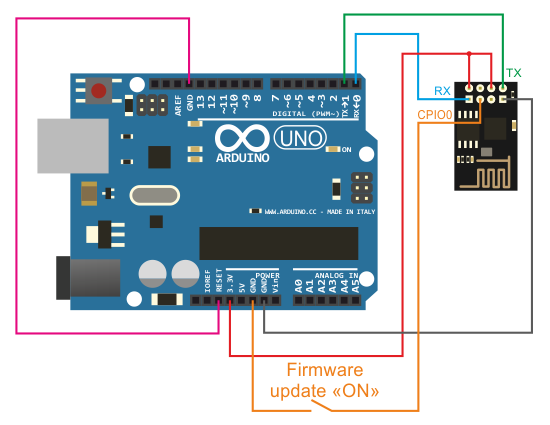 After that, I was able to follow through the tutorial and got this response in the Serial Monitor:

That means my ESP8266 has successfully connected to my Wifi named W3. However, I decided to switch the mode of my ESP8266 from Network Device (mode 1) to Both network device AND Access Point (mode 3) (at this point I called AT+CWJAP? and can still see that it's connected to W3 wifi). I then was able to see the ESP wifi in my wifi list as (AI-THINKER_4C8CF2) but when I connected to it, I cannot connect to the internet. I'm wondering what the problem is and would appreciate any help.

Note: The reason why I switched to mode 3 is because I want to control an Arduino Pro Mini (instead of Arduino Pro) using NodeJS. I followed another tutorial and I figured that I need to connect to an ESP8266 access point.

I uploaded the StandardFirmataSketchPlus to my Arduino Pro Mini, with the baud rate set to 115200 (which is the same baud rate with my ESP8266). The schematic I used is similar to the one below, except I used a 3.3V Pro Mini and a Lipo battery, instead of a 5V: 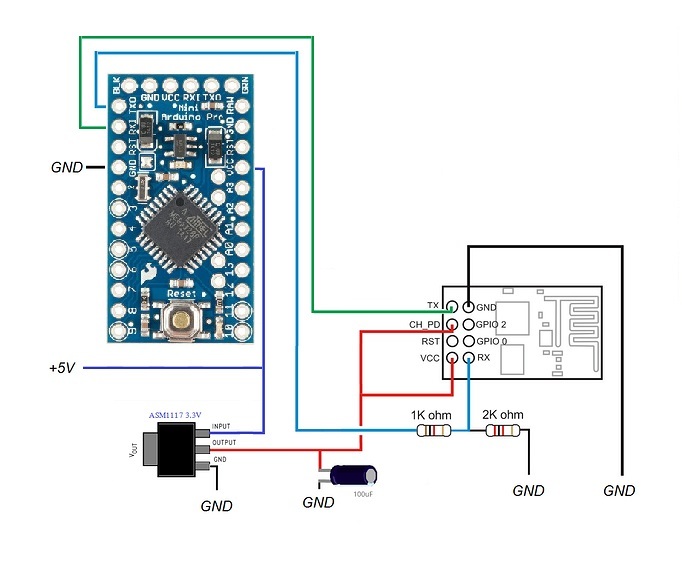 The nodejs code is below:

This code is to test the connection between Arduino and Nodejs and when I run this file, it doesn't work.

you have Firmata in Atmega, AT firmware in ESP and the 'blink led' js on computer.

you did not follow the tutorial properly. it requires jonny-five firmware in esp8266

Not the answer you're looking for? Browse other questions tagged arduino-uno esp8266 wifi arduino-pro-mini node.js or ask your own question.