How do I burn the bootloader?

I was instructed to "burn the bootloader" to my Arduino to fix an error I was getting. How can I do this? (And what exactly is the bootloader?)

The bootloader is a small program that is (almost) always on an Arduino. It manages uploading and starting the sketches you make, and blinks the pin 13 LED whenever the board resets.

To burn the bootloader:

What is a bootloader?

And what exactly is the bootloader?

The bootloader is a small piece of code residing in the "high" part of program memory. Normally it is not erased when you upload new sketches. Its purpose it to be activated immediately after a reset (the fuses are configured to commence code at the bootloader address rather than address 0x0000). The bootloader will wait a short time (such as one second) to see if "programming" data is arriving on the serial port.

How to replace the bootloader

An alternative method to program a bootloader is to use a sketch I wrote a while ago which runs on a:

The "programming" board runs the sketch which has bootloaders for a number of boards hard-coded into it. You connect the programming board to the target board (the board wanting the bootloader) with 6 hook-up wires as shown. 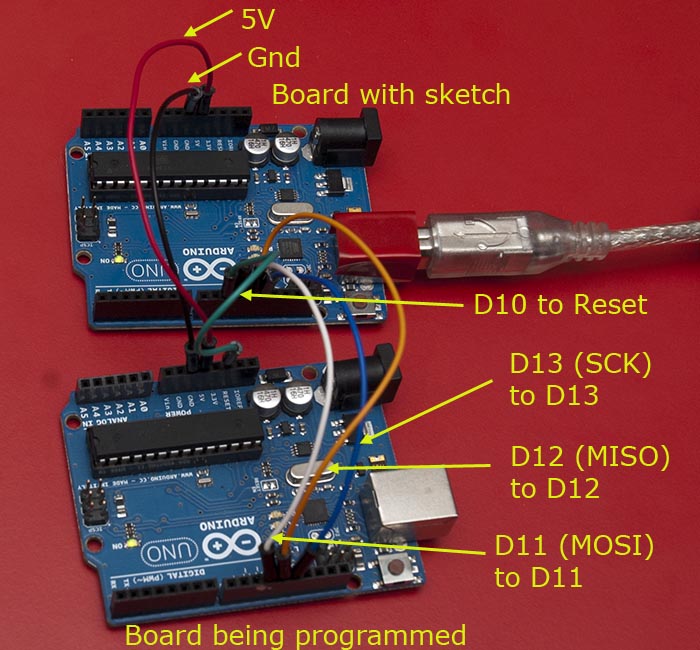 That particular photo illustrates one Uno programming another one.

You run the sketch (operating via the Serial Monitor to give it commands). First it identifies the target chip:

The you press G to program it.

For a Uno this takes one second. To program a Mega2560 takes 3 seconds.

Code can be downloaded from Github: nickgammon/arduino_sketches

-1
Replace Arduino bootloader
158
"avrdude: stk500_getsync(): not in sync: resp=0x00," aka Some Dude Named Avr Won't Let Me Upload My Program
9
Bootup on lower power not functioning
7
"Broken Pipe" when uploading to Arduino UNO
1
Interrupt is activated as soon as I insert a jumper wire into the port