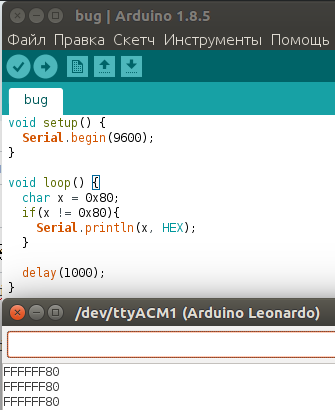 To illustrate the reasons better let's look at the actual content of the data.

0x80 is 0b10000000 in binary. A char is a signed variable, which means that the most significant bit is the sign bit, with two's complement representation

When you print a signed value on the Arduino as HEX there is no 8-bit specific function for it. Neither is there a 16 bit function. However there is a 32-bit signed function, which is the closest match available. So the compiler performs type promotion to 32-bit signed, then represent it as hexadecimal.

Of course, the compiler doesn't go through that whole routine - instead it uses something called sign extension. This method basically means copying the sign bit from the original smaller (char) type into every bit to the left of it in the larger type:

All those are -128 in two's complement, just stored in different size variables. So when you come to print it, that is just what you get - the two's complement representation of -128 in the variable size that has been accepted by the print function.

You might find this site useful for experimentation and furthering your understanding of variable data storage.

if you put unsigned in front of char you won't get that issue (though may encounter others).

Before any operation involving different types, the lower ones must be promoted to higher ones.

The constant 0x80 is an integer value, so x must be promoted to int before the test. The first bit of an int value is the sign bit. Sign bit is extended (copied to the left side bits). So x become 0xFFFFF80 and then you compare it against 0x0000080.

Every time you put a char where an int is excepted the same thing happen.

C is full of traps.

Not the answer you're looking for? Browse other questions tagged data-type or ask your own question.