I pulled my Arduino set out of storage yesterday and was very upset to find that it is not working for some reason. Before I explain the problem, let me explain the situation. 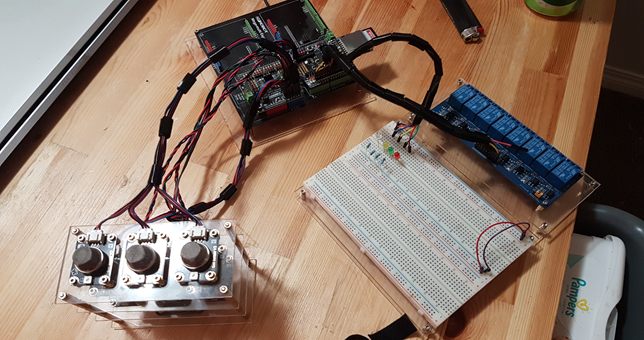 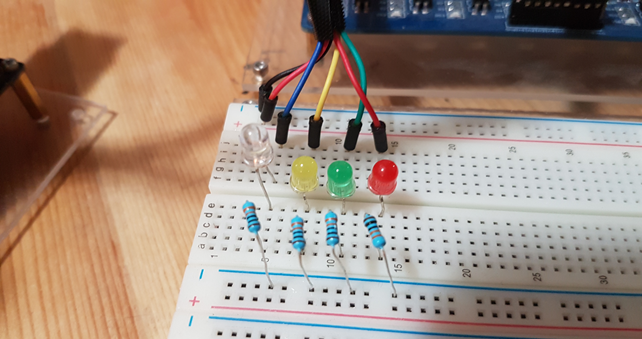 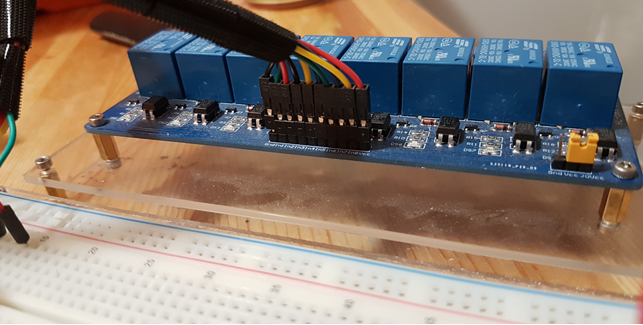 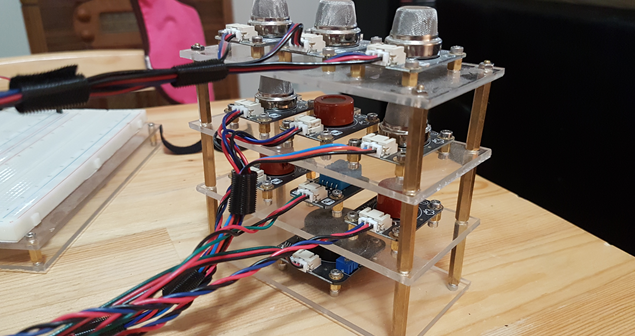 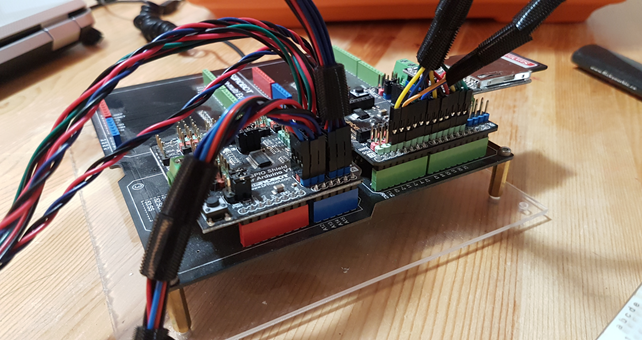 In this 4th photo, the two analog pin sets in use right in front are the ones I remove in order to gain control again. if those are plugged in then it doesnt work. It has nothing to do with those pins specifically, If I remove any two it works again, those ones are just easiest to remove to get it to work: 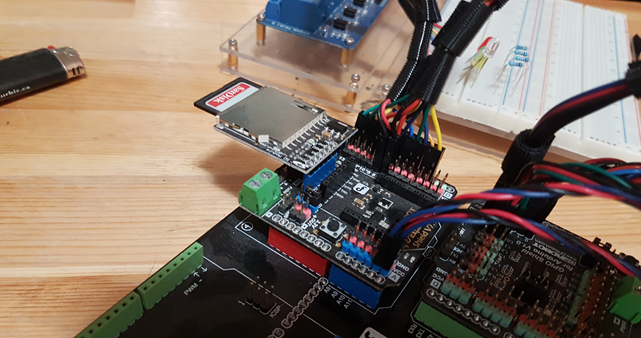 This is basically a test station, where I can hook up what ever I want and see how it works and then move onto another peripheral piece of hardware and make them interact. I went with the 4x-platform breakout board as to maximize I/O space. Once a project is done, I Velcro band them together as to not get them confused and move on.

When I plugged the Arduino into my PC the first time, the lights came on the Arduino and then after about 15 seconds it powered down and the lights went off. My PC did recognize it while it was powered up and the port option under tools in the Arduino IDE was available and I could select the port. After the power down and problems I realized something must be up.

I considered the fact that maybe the Velcro was constricting the wires and causing them to short circuit through the rubber insulation, but couldn't find any info on that online.

After this I decided to cut the PC out of the equation and try just plugging it into the wall, 1st, via USB to 5V1A wall charger, it stayed on for a few seconds and then turned off, 2nd with a 5V2A wall charger, same scenario, 3rd via the barrel jack with the same wall chargers, with no success.

I undid all of the wire bundles to rule out a short circuit, which it did. I then found out after much trial an error that if I removed any 2 of any analog or digital wires, the lights would stay on and it would work.

Now, with two cables removed so it did not lose power, I plugged it into my PC and am now able to program it again and see it in the port in the IDE, but as soon as I plug in another 2 analog or digital peripheral devices it will lose all power and stop working.

A short between rubber insulation at 5v is extremely unlikely

one would think that if a mega board was designed to have so many I/O pins you could actually connect to all of them with out any problem.

Since this happened on both the PC and wall charger scenarios, and the problem seems to be associated when disconnecting any 2 sensors, the problem is most likely at the micro-controller level.

are all the peripheral devices draining the board so much that the USB port on the PC or wall chargers cant handle it?

How do I provide enough power to the board if this is the problem?

Or is this simply faulty board?

If it is a faulty board, what causes this and how do you avoid it?

Just to clarify, looming the wires together into bundles is OK right?

Finally, any help would be really appreciated, this is the first time this has happened and it sucks.

First off, that is one heck of a rig. I'm impressed to the point of "I gotta get me one of those."

Bundling your wires shouldn't have the kind of impact you are seeing, unless there are bare wires touching. You might get induction interference, but not a total shut down.

From what I can see here, it looks like there's so much stuff connected to the Arduino that it's probably starving it for power. You should look into using power rails for Gnd and +5v.

You will also need to check if you are supplying it with enough amps, too. Your computer's USB port only supplies 0.5A, unless it happens to be USB3, then it's 0.9A. Even your 5V1A PSU might not be enough. Consider finding a 2-5 amp wall wart to do some more testing with. There are usually spec sheets with components, so you'll need to add all the power draw for all the components, including the Arduino, and make sure you have more than enough to meet that calculated power draw. Exceeding it by at least 10-20% is usually considered good practice, even for a test rig.

Consider powering your rig's new power rails with the extra PSU even when the Arduino is plugged into your computer. As long as you make sure you aren't trying to take power from the computer and the PSU at the same time with the same component, you should be fine. (Don't cross the streams.)

There could be a short or feedback loop somewhere in your sensors that's causing the extra drain. There are so many wires here that it'd be easy to hook up something backwards. Along with the number of wires, the bundling doesn't let SE-us help you track that down.

You might want to look at the direction your pins are facing. It was an odd situation for me, but having two of the metal clips facing each other was enough for a short. In your "Relay Portion:" pic, they are all facing the same way, which is good. See if there are places where that's not the case and fix it. Like I said, it was an odd situation, but it's a phantom problem you can avoid.

1
Computer not detecting my Arduino MEGA 2560 R3
3
Why does an Arduino MEGA 2560 have different PORTS
3
Arduino mega R17 led blink continuously
3
Mega 2560 & smoking/burning 5v requlator, probable cause?
2
SIM900 and Mega 2560 not sending SMS
0
Voltmeter using Arduino mega 2560 giving unexpected result after some time
1
Arduino Mega not recognized on Raspberry Pi 3b+
1
Mega 2560 does not play audio file when I want. It plays when the first condition is met, but not the other